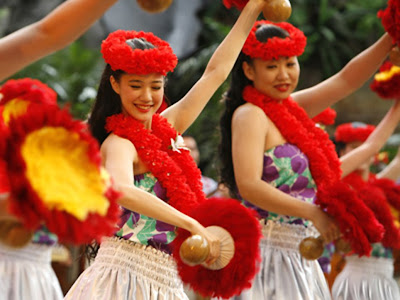 This weekend we watched a wonderful 2006 Japanese movie directed by Sang-il Lee, who also co-wrote it. It is the poignant comedy/drama “Hula Girls”. The film is simple in its premise, but touches subtly on many important social issues including progress, change, unemployment, social inequality, and what it means to be an “outsider”.

The film is set in 1965 in rural northeastern Japan, in a small mining town where almost all of the residents live employed by the coal mine. The changing times and the advent of oil will force the closure of the coal mine and about 2,000 people will lose their jobs. The mining company, in an effort to provide something for the town and give some means of a livelihood to about 500 people, plans to open a “Hawaiian Centre” complete with palm trees and hula dancers right in the middle of the harsh winter climate of Iwaki. The union bosses are set dead against the plan but some girls decide they want to become hula dancers and join a class that is to be taught by a professional dancer who arrives from Tokyo (fleeing from her creditors, it appears). The film depicts the struggle of the young girls to become accomplished dancers amidst an inimical climate, with even their families against them. Kimiko, Sanae and Yasuri are the leaders of the girls and Mrs Hirayana, the dancer from Tokyo first confronts them and then wins them over.

The film is a tender memoir of a different time and pays tribute to the fascination the Japanese have with things Hawaiian. Like the Peter Cattaneo film “The Full Monty”, “Hula Girls” looks at a group of misfits who conquer their insecurities and problems through learning of a particular skill or utilising a hidden talent (in this case, hula dancing). The film was inspired by the real life Jouban Hawaiian Centre (at present called 'Spa Resort Hawaiians') in Iwaki City, Fukushima, which was developed in 1961 in an attempt to stimulate the local prefecture’s economy.

Yû Aoi who plays Kimiko, one of the hula girls, does a wonderful job and is perfectly counterfoiled against Matsuyuki Yasuko who plays the dancing instructress from Tokyo. Kimiko’s mother (and union leader) is also well cast and the supporting actors all make for a good show. The music is well chosen and in keeping with the theme, while the cinematography is also very good. The dancing is excellent and one must remember that this is the Japanese interpretation of Pacific island dancing and even though many Hawaiians may object to the authenticity of the dances, the Japanese versions are a quintessential distillation of hula dancing which is presented in a marvellous way. The final dance sequence is quite stunning.

Although the film contains many humorous moments, its dramatic elements are more of its strength and there are many poignant and teary moments in it. Overall, an unexpectedly enjoyable film that surprised and delighted us.
Posted by Intelliblog at 02:37