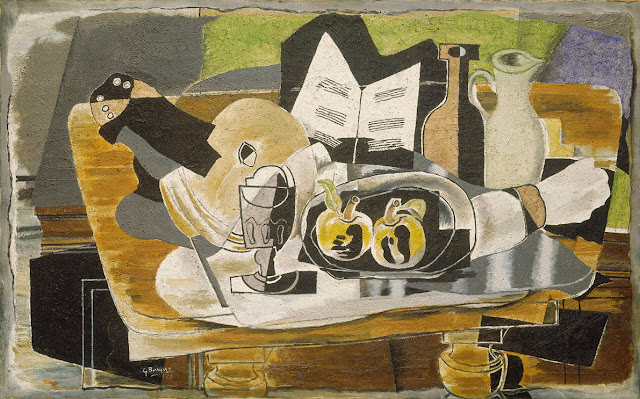 “Art is meant to upset people, science reassures them.” - Georges Braque
Georges Braque,  (born May 13th, 1882, Argenteuil, France - died August 31st, 1963, Paris), was a French painter, one of the important revolutionaries of 20th-century art who, together with Pablo Picasso, developed Cubism. His paintings consist primarily of still lives that are remarkable for their solid construction, muted colour harmonies, and often evoke a serene, meditative quality.

Georges Braque developed his painting skills while working for his father, a house decorator. He moved to Paris in 1900 to study where he was drawn to the work of the Fauve artists, including Matisse, Derain and Dufy, as well as the late landscapes of Cézanne. Meeting Picasso marked a huge turning point in Braque’s development and together they evolved as leaders of Cubism.

After a brief interlude in which he was called up to fight in the First World War, Braque’s style developed in the direction he was to follow for the rest of his life. In establishing the principle that a work of art should be autonomous and not merely imitate nature, Cubism redefined art in the twentieth century. Braque’s large compositions incorporated the Cubist aim of representing the world as seen from a number of different viewpoints. He wanted to convey a feeling of being able to move around within the painting.

From 1909 until his death, Georges Braque devoted himself to the still life-tabletop arrangements with musical instruments, pieces of fruit, and other objects. Of Braque’s fascination with objects, the painter Juan Gris once said, “In the guitar Braque found his new Madonna.” When the human figure did appear in his paintings, it was treated simply as another shape and was often subordinate to the other objects in the composition.

During the last years of his life Braque was honoured with important retrospective exhibitions throughout the world, and in December 1961 he became the first living artist to have his works exhibited in the Louvre.

The painting here, “Still Life: The Table”, of 1928 (Oil on canvas. 81.3 x 130.8 cm, Chester Dale Collection. National Gallery of Art, Washington, D.C.) highlights many features of Braque’s unique vision of the world through his art. There is the cubist element, the low-key colour scheme, the characteristic focus on inanimate objects, superpositions and contrasts that nevertheless unify the depicted objects and combine them in a complementary fashion. This painting reminds me somewhat of an exercise in meditation and its contemplation can give one a sense of tranquillity and inner peace. The texture of the paint and the colours appeal to me especially and as hobbyist/artist I am fascinated by the painting in terms of technique.