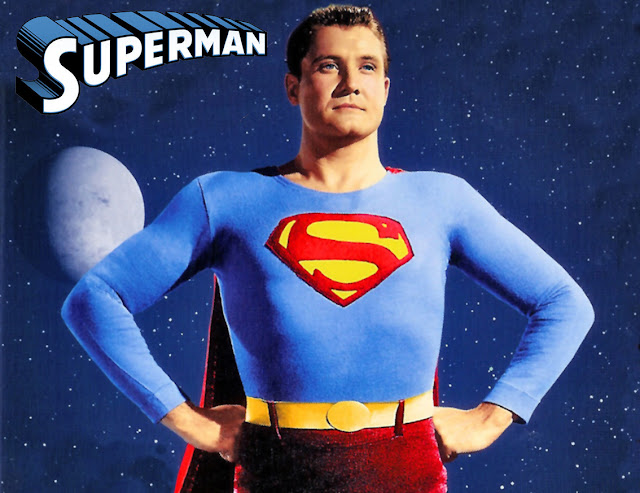 “The final mystery is oneself.” - Oscar Wilde
When I was young I remember reading the Superman comics avidly and enjoying this particular character the most out of the all the superheroes that populated the newsagent stand in the comics section. I also remember watching with my friends the reruns of the 1952-1958 TV series “Superman” starring George Reeves. Sure enough the episodes were corny and clunky and badly made, but they still somehow managed to fire up the imagination and bring the comics to life. I soon outgrew both the comics and TV series, but like all things in our childhood, there is a strong sense of nostalgia that accompanies our memories of them.

When I saw at the video store the 2006 Allen Coulter film “Hollywoodland” and read the notes on the cover, I was a little intrigued, because the film was based on the mystery surrounding the death of George Reeves, officially by suicide, although there were all sorts of stories that suggested foul play may have been involved. I didn’t know anything about the life or death of the actor and as the summary of the plot looked interesting I got the DVD to watch. It starred Ben Affleck as George Reeves, Adrien Brody as Louis Simo, the private eye investigating his death, Dianne Lane as Toni Mannix, Reeves’ lover, and Bob Hoskins as Eddie Mannix, Toni’s husband.

The plot of the film has as follows: Louis Simo, a struggling third-rate LA private investigator, is hired by Helen Bessolo to investigate the death of her son, actor George Reeves. Simo has come across this job through his connections and the job is given to him as a returned favour by a former colleague. Reeves was best known for his title role in Superman, a role which he always despised, in part since it typecast him as a “cartoon” and because it prevented him being considered a “serious” actor. He died on June 16th, 1959 as a result of a single gunshot wound to the head, while in his bedroom in his Los Angeles home. Police ruled a suicide, although the death occurred while guests were in the house and even though the death wasn’t reported until 45 minutes following the shot being heard. The story of Reeves life and death is told in flashback as Simo, who is trying to make a name for himself with this case, talks to or tries to talk to some of the players involved, most specifically the wife of MGM General Manager, Eddie Mannix.

The film is quite hazy about what may have really happened and the viewer is left hanging, especially as the last scene fades and one wants to scream: “Don’t end like that, now!” However, on reflection, I think that the suspension and inconclusiveness in that last scene is quite powerful and contributes to the mystery. It tends to suggest that real life is like this. Full of unsolved mysteries, murders that never get figured out, people who disappear without a trace and criminals who get away with it. And of course add to that the millions who commit suicide and nobody ever gets to know the real reason why they do it.

The film was made with the “film-noir” genre in mind, the 1950s Hollywood setting recreated well, the sets, costumes and ambience looking authentic. The film makes several intriguing suggestions about the death of Reeves and three different “solutions” to the actor’s death are shown, one of them including the official suicide version. We enjoyed the film, although it was a trifle too long and some of the subplots were a distraction rather than adding to the story. The actors all played well and the flashback sequences illustrating the life of Reeves were one of the most interesting parts of the movie.

Diane Lane is great to watch first as a gorgeous vamp and then as the frustrated older woman. Ben Affleck rises to the occasion and gives a great performance. The two lovers play well and there is chemistry between them. Bob Hoskins is another actor who makes the most of his role and play with enough restraint and great conviction to develop a very real, frightening persona on screen. Adrien Brody was miscast as the detective and he struggles to convince. Besides which, the subplot centering on his family life is quite marginal to the plot and distracts.

We recommend the film and it is certainly one to hunt out and watch. It explores the dirty world of Hollywood and shows some of the rust on the tinsel of the place.
Posted by Intelliblog at 01:50