AND THE STOCKS FALL... 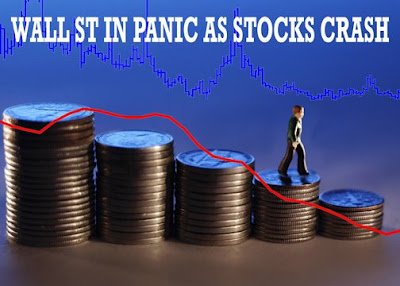 “One must be poor to know the luxury of giving.” – George Eliot

Stocks on Wall Street plunged overnight after the collapse of investment banking house Lehman Brothers and the sale of another major player, Merrill Lynch. Meanwhile, the world's biggest insurance firm, American Insurance Group, is battling to find a capital injection. As the US economy takes another hiding the world watches on nervously and the stocks tumble all over the globe. This turn of events is no surprise – it was a question of when, rather than why. Many people’s lives around the world will be affected and as far as the USA is concerned, it will definitely hurt.

Weakness across the Australian share market has dragged stocks down about 1.8 per cent in response to the crisis on Wall Street. Banking stocks have tumbled with ANZ and National Australia Bank down 3.6 per cent. London and Tokyo tumbled to their lowest levels for more than three years on Tuesday after Wall Street had crumbled overnight. Russia 's key stock market index plunged more than nine percent awaiting the start of New York trading.

The share market volatility in Australia will affect the retirement plans of hundreds of thousands of people. Balanced superannuation funds have lost about 11 per cent so far this calendar year. Some people are going to have to stay in the workforce for one or two years longer to get over this hump and it is a significant event for a lot of people and it will affect hundreds of thousands of Australians who really have to clearly rethink their retirement strategies.

So what caused it all? After the warning signs in the late eighties, the USA chose to patch thing up with band-aids, rather with radical, solid solutions. The crisis was managed poorly and the financial problems of the country were swept under the carpet. This situation has been compounded and abetted by the most incompetent government in three-quarters of a century. History will record George W. Bush as the president who did most to weaken and diminish the United States on every front. The Wall Street crisis in part will result in financial power following the drift in economic power away from the USA. After this stocks cleanout, New York will emerge as a cleaner, stronger financial centre, a world financial capital – but not the financial capital…

That will ultimately be good news worldwide, as the USA stock market crash will not seriously affect world economy in the longer turn. Global growth continues around the 4 per cent mark. The BRIC economies (Brazil, Russia, India and China) will still invest about US$22 trillion in today's dollars on infrastructure over the next decade and never mind what the oil-rich Middle East states spend or the regional economies (such as Australia) that hang off the BRICs. China continues to build another Brisbane every month. The spreading of economic power more equitably around the world, ensures that the world is no longer so reliant on a couple of major Western nations, who up till now have dictated the world’s fate.
Posted by Intelliblog at 03:06