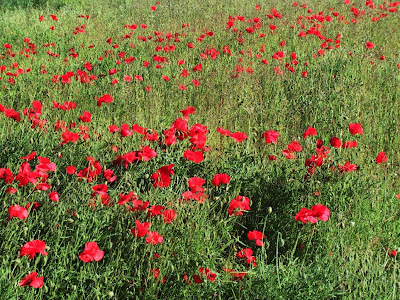 The eleventh hour of the eleventh day of the eleventh month represents a very important moment on what is commemorated as Remembrance Day in many countries around the world. Thousands of people attended a service at the Australian War Memorial in Canberra today, and in Australia in nearly all cities and towns, ceremonies were held, 90 years after the end of World War I. The guns fell silent on the Western Front on November 11, 1918, but not before ten million soldiers lost their lives in the Great War, with 60,000 of them being Australians.

The sacrifice of fallen soldiers is on the minds of all Australians today, as we commemorate this anniversary. The tradition of Remembrance Day began soon after World War I, what is still known as the “Great War”. It really affected everybody, and it certainly affected every family in Australia at that time. Crowds at today's ceremony were invited to lay poppies on the tomb of the unknown soldier in Canberra, while everywhere artificial poppies were on sale to raise money for the veteran community. Poppies are significant for Remembrance Day because they were the first flowers to bloom on the Western Front at the end of the First World War after all the fighting had finished.

Claude Choules, a107-year-old veteran of both World Wars has used Remembrance Day to call for Australian troops to be brought home. He enlisted in the British Royal Navy when he was 14-years-old and was present at the scuttling of the German Fleet at Scapa Flow at the end of World War I. He moved to Western Australia in 1926, and served with the Royal Australian Navy during World War II. Mr Choules says he would like to see an end to the conflicts in Iraq and Afghanistan: "I don't want to see any more wars. Seeing war is not exciting, like it used to be.” As they say, old age brings wisdom…

Here is a poem by Siegfried Sassoon, a World War I soldier and poet:

I knew a simple soldier boy
Who grinned at life in empty joy,
Slept soundly through the lonesome dark,
And whistled early with the lark.

In winter trenches, cowed and glum,
With crumps and lice and lack of rum,
He put a bullet through his brain.
No one spoke of him again.

You smug-faced crowds with kindling eye
Who cheer when soldier lads march by,
Sneak home and pray you’ll never know
The hell where youth and laughter go.