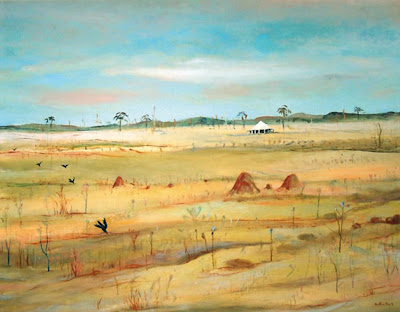 “Everyone must take time to sit and watch the leaves turn.” - Elizabeth Lawrence

Arthur Boyd (1920-1999) was born into a lineage of gifted painters, potters, musicians and architects, to become the most celebrated member, in Australia’s cultural history, of that artistic family. After spending his youth painting idyllic impressionist landscapes and portraits of the places and people that surrounded him in the family haven at Murrumbeena in Victoria, the onset of WWII was the catalyst for the dramatic shift towards the highly expressive and personal style, which characterised his painting from during the 1940s onwards.

Influential in Boyd's development were artists associated with art patrons, John and Sunday Reed such as Nolan, Tucker, Perceval and Bergner. Boyd’s images of the deprivation of modern urban society in the war years, infused thematically with Old Testament narrative, was influenced by German Expressionism, Surrealism and the northern European painting tradition. His explorations as a painter-ceramicist yielded a series of monumentally conceived terracotta masterpieces.

In the 1950s his poetic depiction of the luminous Wimmera landscape transformed the surface of his paintings with the rich combination of oil, tempera and resin, reflecting his constant experimentation with differing materials and modes of expression. Following his move to England in 1959 where he achieved significant success, Boyd began to explore the medium of printmaking, producing etchings, lithographs and illustrated books. In 1979 the artist purchased a property on the Shoalhaven River where his depictions of the infinite variety of this magnificent landscape fuelled his artistic imagination until his death in 1999.

Here is “Wimmera Landscape” ca1975, which is an exceptional painting of one of Boyd’s most important landscape series: The Wimmera region of Western Victoria.

The leaves unhooked themselves from trees
And started all abroad;
The dust did scoop itself like hands
And threw away the road.

The wagons quickened on the streets,
The thunder hurried slow;
The lightning showed a yellow beak,
And then a livid claw.

The birds put up the bars to nests,
The cattle fled to barns;
There came one drop of giant rain,
And then, as if the hands


That held the dams had parted hold,
The waters wrecked the sky,
But overlooked my father’s house
Just quartering a tree.
Emily Dickinson (1830-1886)
Posted by Intelliblog at 00:39