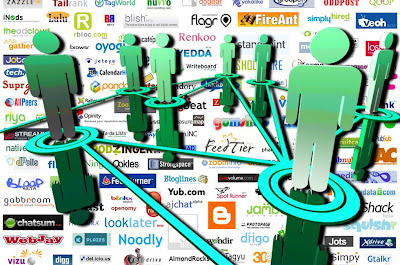 “Talking is like playing on the harp; there is as much in laying the hands on the strings to stop their vibration as in twanging them to bring out their music.” - Oliver Wendell Holmes

Where would be in today’s world without social networking on the internet? It has become a part of most people lives and has created some wonderful opportunities to connect with people in distant places whom otherwise you may never have known existed. I remember when I was a child I used to have a penfriend for a little while. While it lasted it was a good experience, but how difficult it was to maintain that type of relationship when one relied on snailmail to communicate! Also, being forced to do it in a language that was not my own (English) while I was learning it, made it all the more difficult. Nevertheless, I think it sowed the seeds of my future social networking and my blogging…

The choice of social networking platforms nowadays is an embarrassment of riches. It seems that everywhere one turns on the net one is able to find a platform for connecting with family, friends, neighbours, acquaintances, but also of course, perfect (or imperfect!) strangers. I remember my first attempt at blogging on 23/3/06 on the now defunct Yahoo 360, and I quote this first blog in full:

“My first day of blogging, this being the beginning of a southern autumn and northern spring. According to the Roman Catholic calendar, this is St Niza's feast day while the Greek Orthodox calendar would fete St Nikon and his 199 Students (rather remiss of him not find another one and make it an even 200 students!). Reading at the moment: "Ripe for the Picking" by Annie Hawes. An amusing journal of an Englishwoman's experiences in Liguria, northern Italy. Today is World Meteorology Day, rather fitting for Australia, as we have just had the terrible effects of cyclone Larry to contend with up in northern Queensland and getting ready for the next one - cyclone Wati. This morning I listened to an old favourite of mine, Couperin’s “Les Barricades Mystérieuses”. Very hypnotic music, highly ornamented and forward-moving. A puzzling title especially as the music seems to be so vivacious and has no trace of hesitation as one would imagine from the “barricades” of the title – perhaps thence the mystery!”

A little unsure of myself, wary of putting my thoughts out there on the web in public view for everyone to read and comment on, the blogging experience was an interesting enough one for me to continue with and maintain daily for nearly three-and-a-half years. I have met (virtually) some wonderful people and have been learning so much! I have broadened my mind and have kept in contact with some friends in distant places. Since the days of my first blogging on Yahoo 360, I have experimented with a few other platforms and also maintain a blog at work, which deals with matters related to my job. Yahoo 360 died, and after trying both Multiply and Blogger I chose the latter. It was good to see some of my Yahoo 360 friends join me, but a little sad to lose some others who either gave up blogging or moved to another platform.

Facebook and Twitter became THE places to do one’s social networking for a while, but both of these extremely popular platforms are now becoming shunned by a new breed of internetters, who have become known as “refuseniks”. These people are seen by the Facebookers as a little up themselves and emotionally manipulative, or even snobbish. However, the new breed of social networkers regard Facebook and Twitter as “old hat’ and also much too controlled by “Big Brother”. The unsavoury interference of the Facebook administrators in the membership and content, the leakage of users’ private information, the misuse of the platform, and the sheer pushiness of the thing put me right off straight away. Even though nowadays not having a Facebook page is like not having a mobile phone or email, I must confess that yes, I am not only a Nick, but I am also a Refusenik!

refusenik |riˈfyoōznik| noun
1 A person in the former Soviet Union who was refused permission to emigrate, in particular, a Jew forbidden to emigrate to Israel.
2 A person who refuses to follow orders or obey the law, esp. as a protest.
3 A person who refuses to follow popular trends and buckle under peer pressure.
ORIGIN 1970s: from refuse (Middle English: from Old French refuser, probably an alteration of Latin recusare ‘to refuse,’ influenced by refutare ‘refute.’) + -nik (from Russian (on the pattern of (sput)nik) and Yiddish).

(Incidentally if sheet music isn’t your thing and you would rather hear the Couperin piece referred to above, here it is, courtesy of YouTube).

Jacqui BB is hosting Word Thursday!
Posted by Intelliblog at 00:07