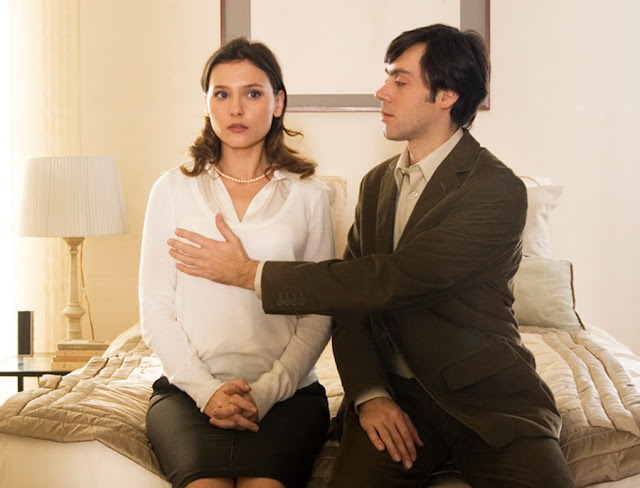 “My actions are my only true belongings. I cannot escape the consequences of my actions. My actions are the ground upon which I stand.” - Thich Nhat Hanh

We watched a rom-com from France at the weekend, which was quite lightweight and enjoyable, but still, it had bit of a hidden sting in its tail… The 2007 romantic comedy “Un Baiser, s'il Vous Plait” released in English as “Shall We Kiss?” was written and directed by Emmanuel Mouret. As if that weren’t enough, he also played one of the leading roles (see above as Nicolas, with Virginie Ledoyen, who plays Judith)! We rather enjoyed seeing this amusing persiflage of a film and we got into a discussion following it, which I presume is exactly what the director set out to do. An enjoyable rom-com, which nevertheless tried to make a point about the profound consequences of one’s even slightest actions.

The film is a story within a story and briefly, the plot is as follows: Gabriel, a native of Nantes, and Émilie, a visiting Parisienne, meet by chance in Nantes and he offers her a ride. They seem to get on very well and they end up dining together, talking and laughing all the while. As Émilie gets dropped off at her hotel by Gabriel, he tries to give her “a kiss without consequences”. Émilie refuses the kiss and warns him that a kiss could have unexpected consequences. When the perplexed Gabriel protests the innocence of his kiss, Émilie tells him a story, which in flashback makes up the bulk of the movie. It concerns Judith, her husband Claudio and her best friend, Nicolas. The triangle of this main story illustrates Émilie’s refusal to kiss Gabriel.

The film illustrates the impossibility of indulging one’s desires without affecting someone else’s life. This is especially true in relationships, even in very happy relationships where one partner may “stray” and bring the universe of the other partner collapsing in around the couple. The plot also distinguishes between falling in love and loving, passion and affection, selfless sacrifice and selfishness. The difference between the lover and the beloved is also pointed out. I shall not say more in case you wish to see the film yourself, so I will not spoil it.

Apropos films and watching movies, in my paper in the train today I saw a risible article regarding what wine to drink when watching movies. The ploy is a marketing device and concerns Oovie,  a DVD renting company and a Sydney Wine Bar, Time to Vino. The 'Time to Vino' sommelier, Clint Hillery said that the DVD-wine pairing system is like selecting the right wine to have with a specific kind of food/meal, the best combinations enhancing the effects of each other. In terms of the movie genre, the effect caused by the right wine would be a heightening of the emotions that were generated by the film. In case you are wondering what drop is right for what genre, here are the recommendations:

For more of the blurb, go into the “news” section of the Oovie website. There you go, another Australian cultural first! I wonder what I should drink with SciFi?
Posted by Intelliblog at 20:30