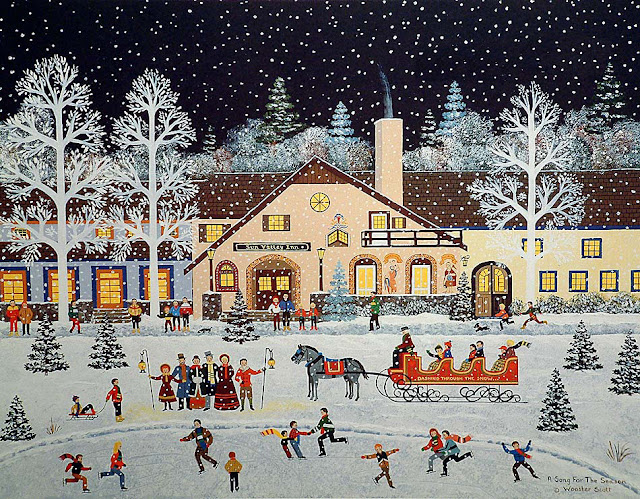 For Art Sunday today, a seasonal (well at least for the Northern Hemisphere!) painting by Jane Wooster Scott. It is a canvas named: “A Song for the Season”.

Wooster Scott is an American naïve artist who paints nostalgic scenes of turn-of-century, early 20th century America. She lives in Los Angeles and despite her modern surroundings and sophistication, she has chosen to turn back the hands of time in her paintings, because of her love for early Americana, but more importantly for the values inherent in society then.  She says that “…people were more honorable then. Their word was their bond. The pace was slower and more time was given to the appreciation of beauty. People loved their country and they were proud of the fact…”

Of course nostalgia paints everything with charming colours, however, one can agree that in those bygone times, people were friendlier, families were more united and tied together, it was safer and cleaner and there were less pressures and stress. One could walk safely at night, front doors were not locked and car keys were left in the ignition.

The artist travels widely in the USA, takes many photographs from which she is inspired to build composite scenes, taking great pains with composition, colour schemes and balance. Her own childhood memories and emotions, her thoughts and values are reflected in her canvases.

She has exhibited widely for nearly two decades now in Los Angeles and New York, and most of her shows have been completely sold out on opening night. Many politicians, actors, singers and industrialists collect her work. Paintings of hers hang in the American Embassy in Canberra, Australia, as well as being part of the permanent White House collection in Washington DC.
Posted by Intelliblog at 01:42