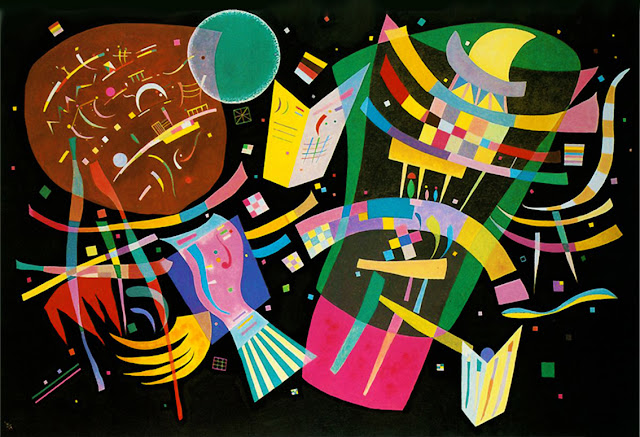 “Of all the arts, abstract painting is the most difficult. It demands that you know how to draw well, that you have a heightened sensitivity for composition and for color, and that you be a true poet. This last is essential.” - Vassily
Russian artist Vassily Kandinsky, was born this day in 1866 in Moscow, so it is quite appropriate to devote Art Sunday to him today. Kandinsky was one of the first creators of pure abstraction in modern painting and co-founded the influential Munich group Der Blaue Reiter (“The Blue Rider”; 1911–14). His name in full is Vasily Vasilyevich Kandinsky   and he was born December 4th in 1866, Moscow, Russia. He died Dec. 13, 1944, Neuilly-sur-Seine, France.
Kandinsky spent his early childhood in Odessa. His parents played the piano and the zither and Kandinsky himself learned the piano and cello at an early age. The influence of music in his paintings cannot be overstated, down to the names of his paintings “Improvisations”, “Impressions”, and “Compositions”. In 1886, he enrolled at the University of Moscow, chose to study law and economics, and after passing his examinations, lectured at the Moscow Faculty of Law. He enjoyed success not only as a teacher but also wrote extensively on spirituality, a subject that remained of great interest and ultimately exerted substantial influence in his work.
In 1895 Kandinsky attended a French Impressionist exhibition where he saw Monet’s “Haystacks at Giverny”. He stated, “...it was from the catalogue that I learned this was a haystack. I was upset I had not recognised it. I also thought the painter had no right to paint in such an imprecise fashion. Dimly I was aware too that the object did not appear in the picture...”
Soon thereafter, at the age of thirty, Kandinsky left Moscow and went to Munich to study life-drawing, sketching and anatomy, regarded then as basic for an artistic education. It was ironic that Kandinsky’s work moved in a direction that was of much greater abstraction than that which was pioneered by the Impressionists. It was not long before his talent surpassed the constraints of art school and he began exploring his own ideas of painting: “...I applied streaks and blobs of colours onto the canvas with a palette knife and I made them sing with all the intensity I could...” – he wrote. Now considered to be the founder of abstract art, his work was exhibited throughout Europe from 1903 onwards, and often caused controversy among the public, the art critics, and his contemporaries.
An active participant in several of the most influential and controversial art movements of the 20th century, among them the Blue Rider which he founded along with Franz Marc and the Bauhaus which also attracted Klee, Geiniger, and Schonberg, Kandinsky continued to further express and define his form of art, both on canvas and in his theoretical writings. His reputation became firmly established in the United States through numerous exhibitions and his work was introduced to Solomon Guggenheim, who became one of his most enthusiastic supporters.
In 1933, Kandinsky left Germany and settled near Paris, in Neuilly. The paintings from these later years were again the subject of controversy. Though out of favour with many of the patriarchs of Paris’s artistic community, younger artists admired Kandinsky. His studio was visited regularly by Miro, Arp, Magnelli and Sophie Tauber. Kandinsky continued painting almost until his death in June, 1944. His unrelenting quest for new forms which carried him to the very extremes of geometric abstraction have provided us with an unparalleled collection of abstract art.
The painting above is Kandinsky’s “Composition X” of 1939. It is in the Geometric Abstraction style and is quite striking as the artist uses a dark background to highlight the carefully composed multicoloured geometric shapes, some containing intricately detailed subdivisions. One may observe some recognisable objects within the painting, for example open books, a merry-go-round, a building or even a fish on a plate (!), however, the artist’s intention in creating an abstract composition with no reference to the real world is indisputable. The painting relies on its division of the picture plane into areas of flat colour and the interrelationship of shapes on the background are of themselves of adequate aesthetic appeal. The painting would work as well hung upside down or on its side (nullifying the well-known joke about an abstract painting being hung “upside down” in a gallery and nobody noticing it…).
Posted by Intelliblog at 09:34