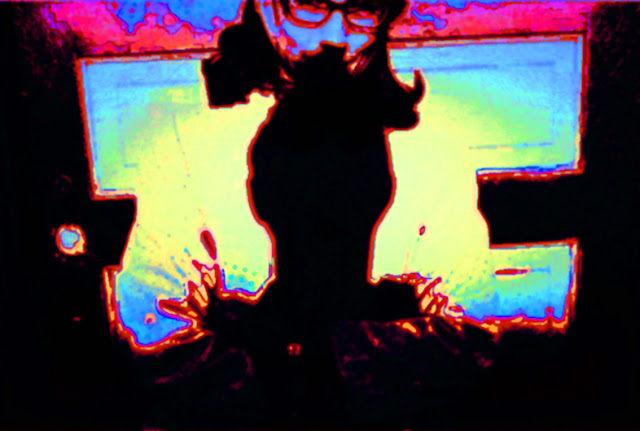 “Humor is just another defense against the universe.” - Mel Brooks
It’s been a little sad for me lately given all that has happened with my friend being diagnosed with cancer and the visits to the hospital and so on. I’ve also had a look at my recent Magpies and they have been rather melancholy and glum! I looked at the image and felt something heavy and lugubrious welling up from the cellars of inspiration. However, you’ll be relieved to know I’ve locked the cellar door and went up to the attic instead, where all the happy hoppers reside and came up with something humorous that matched the slightly altered image, with apologies to Mr Friedlander…
Here is my contribution for this week’s Magpie Tales:
The French Hat
“Imogen, dear, that hat you wear will never do
We’re going to the cinema you know!”
“Oh, yes, of course it will and don't you stew,
It’s French, so elegant, so ‘comme-il-faut’…”
“Imogen, those behind us shall grumble and complain,
We’ll never hear the end of it, I feel…”
“Oh, shush! A chic and wee chapeau, makes me feel urbane,
Besides, it’s such a delicate shade of teal!”
“Imogen, dear, I am sure you know what is best,
But I fret that we shall spoil our outing…”
“Tut-tut, Henry you are such a bore, desist and rest;
All’s well there will be no loutish shouting!”
So off they went, he short and fat, she lean and tall,
The hat balanced precariously on coiffed beehive.
They sat right up the front and in the centre of the hall,
She high, while Henry shrank and hoped all to survive.
“Down with your blasted hat, up front I cannot see!
Take off the darned contraption and let us enjoy the flick!”
“Oh, Henry an appalling place! Oh, goodness, me!
I feel as though I could get up and give that man a kick…”
“Oh Imogen, dearest love I knew it all along, that hat
Will cause much trouble, strife and discontent!”
“Henry get up and be a man! Don’t let fools treat you like a mat!
Use violence if you must, that lout’s no gent!”
“Down, down! Off with that tatty blue thing up front!”
“Henry, stop hiding, up you get we shall leave!
This is no place for people of quality; Oh, such affront!”
“Imogen, dear, indeed! The ones who go won't grieve!”
So off they went, he glum and fat, she proud and tall,
The hat still held precariously on coiffed beehive.
She killed with dagger eyes the youth, whose catcall
Forced their exit; but hat was held high, joyously alive.
Posted by Intelliblog at 01:14