ORFF GATHERING HENBANE IN THE BAHAMAS 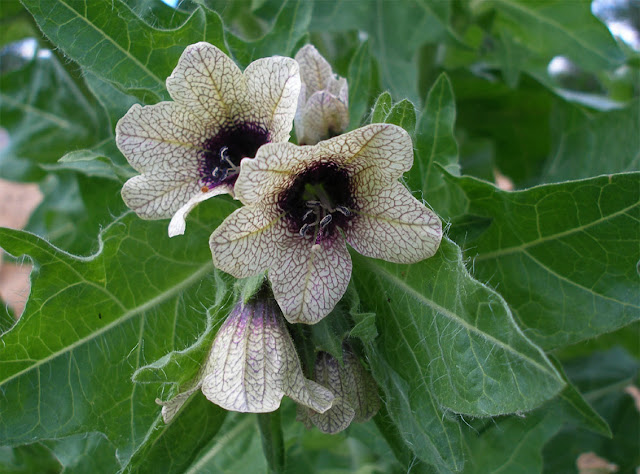 “Everything great in the world is done by neurotics; they alone founded our religions and created our masterpieces.” - Marcel Proust
Henbane or stinking nightshade, Hyoscyamus niger, is the birthday plant for this day.  The generic name of the plant was given it by Dioscorides and is derived from two Greek words, hyos, “of a hog” and kyamos, “bean”, supposedly because hogs ate the fruit.  The whole plant has an offensive smell and is poisonous. The plant has been used medicinally and was historically used in combination with other plants, such as mandrake, deadly nightshade, and datura as an anaesthetic potion, as well as for its psychoactive properties in “magic brews”. These psychoactive properties include visual hallucinations and a sensation of flight. Its usage was originally in continental Europe, Asia and the Arab world, though it did spread to England in the Middle Ages. The use of henbane by the ancient Greeks was documented by Pliny. The plant, recorded as Herba Apollinaris, was used to yield oracles by the priestesses of Apollo.

The name henbane dates at least to A.D. 1265. The origins of the word are unclear but “hen” probably originally meant death rather than referring to chickens. Hyoscyamine, scopolamine, and other tropane alkaloids have been found in the foliage and seeds of the plant. Common effects of henbane ingestion in humans include hallucinations, dilated pupils, restlessness, and flushed skin. Less common symptoms such as tachycardia, convulsions, vomiting, hypertension, hyperpyrexia and ataxia have all been noted. Henbane can be toxic, even fatal, to animals in low doses. Not all animals are susceptible, for example, the larvae of some Lepidoptera species including Cabbage Moth eat henbane. It was sometimes one of the ingredients in gruit, traditionally used in beers as a flavouring, until replaced by hops in the 11th to 16th centuries (for example, the Bavarian Purity Law of 1516 outlawed ingredients other than barley, hops, and water).

The poison hyoscyamine, derived from the young shoots and leaves of the plant was used by Dr Hawley Harvey Crippen, an American homoeopath living in London, in 1910 to murder his wife. Henbane is thought to have been the “hebenon” poured into the ear of Hamlet’s father, as described by Shakespeare. The plant symbolises imperfection and is under the astrological rule of Saturn.

Famous birthdays on this day are:

Carl Orff (1895–1982) was a German composer and music educator. His best-known work is Carmina Burana (1937), a secular oratorio derived from medieval German and Latin poems. His system for teaching music to children, based on rhythmic and verbal patterns and the pentatonic scale, is widely used. He also wrote several operas, amongst which are Der Mond (1937-8) and Die Kluge (1941-2).

It is also the national day of the Bahamas. The Bahamas are a group of about 700 islands and 2,000 coral reefs to the North of Cuba and the Southeast of Florida. The country became independent of the UK in 1973, the capital being Nassau. The Bahamas are just under 14,000 square km in area and have a population of about 300,000. The major employer is tourism while other economic supports are ship registration and off-shore financing and banking. Fishing and domestic agriculture are under development in order to reduce imports.
Posted by Intelliblog at 10:48