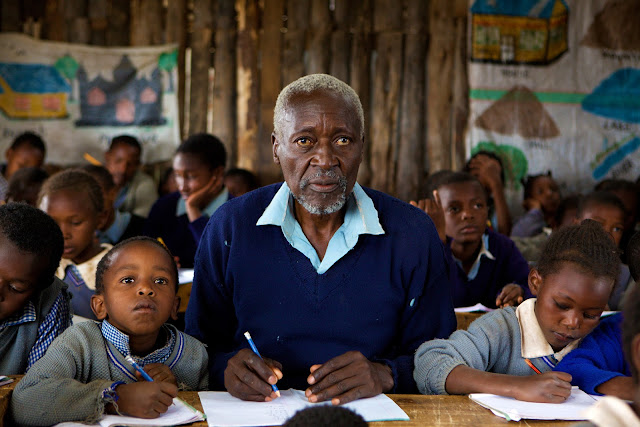 “Intellectual growth should commence at birth and cease only at death” - Albert Einstein
Sometimes one watches a movie and it ticks all the boxes: Good story, good acting, good scenario, well made, well produced. It is very much an example of entertainment, education, emotional lift and a case of 100 or so minutes of time well spent. Such was a film we recently watched, Justin Chadwick’s “The First Grader”  of 2010, starring Oliver Litondo, Naomie Harris, Emily Njoki and Alfred Munyua. Even though this is not a “feel-good” movie “especially suitable for children” as it is touted, it is a very good film for all ages and good for children at school who can watch it under supervision and can be guided through the debriefing that should follow it.
The plot is Ann Peacock’s version of the true story of Kimani N'gan'ga Maruge (Litondo), an 84-year-old Kenyan man who, following a Kenyan Government pronouncement that “Free Education is Available for Everyone”, successfully enrolled in first grade. Maruge is a former Mau-Mau revolutionary and prisoner of war. After being tortured by the British army in the 1950s, and having his family killed, he was interred in concentration camps. His spirit, however, was never broken. The film highlights the neglect of former revolutionaries by newly installed bureaucrats – a common enough occurrence in many countries, and as depicted in the film, in Kenya as well. The dedicated teacher (Harris) who accepts Maruge in her class comes to understand Maruge and his motivation and is willing to risk her job and her life and limb in order to give Maruge the chance to an education she feels he deserves.
It is a somewhat simplified story, but its sketched out and highlighted episodes serve to bring to the fore the terrible treatment that Africans were subjected to during colonial rule. The scenes of torture and the war atrocities shown only scratch the surface, but they are powerful and necessarily violent scenes that serve as important reminders of historical facts and they underpin the viewers’ understanding of Maruge’s motivation.
In terms of the actors, all the school children and most of the players were not professional actors but ordinary Kenyan people. The exception was Naomie Harris, an excellent English screen actress, who played Jane Obinchu, the first grade teacher, impeccably. The performance by Oliver Litondo as Maruge is quite amazing, and he is perfect for the role. Litondo is a native Kenyan who used to be a news anchor with no previous acting experience. Chadwick and their crew spent several weeks in Kenya working with locals while preparing to shoot this movie and the result is an extremely sensitive and poignant film. While there are some lighter moments of humour, most of the time this film touches the heart and makes the viewer deplore the very worst that is shown in human nature.
The cinematography and direction of the film are very good and the sweeping landscapes of Kenya are used to great effect as the backdrop to the story. The thriving metropolis of Nairobi as the setting for the “New Africa for Africans” is also very effective and shows off well the battle of the “little guy” against the “government bureaucracy”. A highly appropriate soundtrack underscores the action perfectly without being obtrusive.
As an educator I especially enjoyed the film, seeing how I concurred with the Kenyan wise saying: “Keep on learning until you have soil in your ears”. We recommend the film most highly, but be prepared for some highly charged themes and violent scenes and if this film is shown to schoolchildren, they should be suitably prepared and debriefed afterwards.
Posted by Intelliblog at 21:44