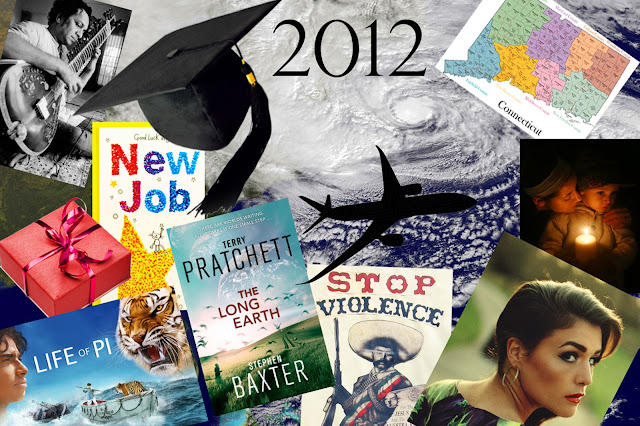 For last year’s words belong to last year’s language and next year’s words await another voice.” – T.S. Eliot
It is customary at this time of the year to review all that has been in the past year and reflect on it all, hopefully learning something, appreciating much and deploring a few things. While being thankful for all the positive things, looking back also allows us to assess what has been and hopefully be prepared to not allow what negative things have happened to not occur in the future.
The most memorable news item – Sandy superstorm
Hurricane Sandy was a hurricane that devastated portions of the Caribbean and the Mid-Atlantic and Northeastern United States during late October 2012, with lesser impacts in the Southeastern and Midwestern states and Eastern Canada. Sandy, classified as the eighteenth named storm and tenth hurricane of the 2012 Atlantic hurricane season, was a Category 2 storm at its peak intensity. While it was a Category 1 storm off the coast of the Northeastern United States, the storm became the largest Atlantic hurricane on record (as measured by diameter, with winds spanning 1,800 km). Preliminary estimates of losses due to damage and business interruption are estimated at $65.6 billion (2012 USD), which would make it the second-costliest Atlantic hurricane, behind only Hurricane Katrina. At least 253 people were killed along the path of the storm in seven countries.
The worst event – The gang-rape and death of an Indian student in Delhi
One of hundreds of attacks reported in New Delhi each year, the gang rape and murder of a medical student caught Indian authorities and political parties flat-footed, slow to see that the assault on a private bus had come to symbolise an epidemic of crimes against women.
The saddest time – Connecticut shooting
Most of the victims at Sandy Point died at the very start of their young lives, tiny victims taken in a way not fit no matter one’s age. Other victims found their life’s work in sheltering these little ones, teaching them, caring for them, treating them as their own. After the gunfire ended at Sandy Hook Elementary School, the trail of loss was more than many could bear: 20 children and six adults at the school, the gunman’s mother at home, and the gunman himself.
The most memorable death - Ravi Shankar, KBE (7 April 1920 – 11 December 2012)
Shankar often referred to by the title Pandit, was an Indian musician and composer who played the sitar, a plucked string instrument. He has been described as the best-known contemporary Indian musician.
The most life-changing event – New job
In May this year I switched jobs and took up an exciting new position that I am very pleased with. Although it is still in academia, it is also a management role that has a lot of variety, gives me the opportunity to travel a lot around the universities in Australia and allows me to be involved in online learning initiatives, something that I have always been interested in.
The most significant new encounter – My new boss
A fellow academic, also newly appointed in my new job, she provided encouragement, support, constructive criticism and friendship.
The biggest satisfaction – Publication of a scientific paper on some research that I was instrumental in setting in train the year before. It was able to allow some members of staff in my previous job to collaborate with one of the largest hospitals in Melbourne and do some research that brought together two widely different medical paradigms.
The biggest surprise – An unexpected small gift from a person I don’t know well!
Very often small gestures make a big difference. I am a great believer in doing things for people that I don’t know, making a difference in people’s lives and reassuring people that basic human values still exist and that to be kind to each other can provide the greatest satisfaction.
The most memorable meal – A very special dinner with a very special person on a very special anniversary…
The best trip – Trip to Perth for a graduation ceremony
It was great to see a small group of students graduate after having done all of their course online in remote areas of Australia. These students exemplified great passion and determination and ability. They graduated with exceedingly good marks and demonstrated that getting a quality tertiary education completely online is feasible.
The best song – Jessie Ware – “Something Inside”


The best book – “The Long Earth” by Terry Pratchett & Stephen Baxter
The ‘Long Earth’ is a (possibly infinite) series of parallel worlds that are similar to Earth, which can be reached by using an inexpensive device called a “Stepper”. The “close” worlds are almost identical to ‘our’ Earth, others differ in greater and greater details, but all share one similarity: On none are there, or have there ever been, Homo sapiens - although the same cannot be said for earlier hominid species, especially Homo habilis. The book explores the theme of how humanity might develop when freed from resource constraints: one example Pratchett has cited is that wars result from lack of land - what would happen if no shortage of land (or gold or oil or food) existed? The book deals primarily with the journeys of Joshua Valienté (a natural ‘Stepper’) and Lobsang, who claims to be a Tibetan motorcycle repairman reincarnated into a computer. The two chart a course to learn as much as possible about the parallel worlds, traveling millions of steps away from the original Earth. They encounter evidence of other humanoid species (referred to as trolls and elves); of human settlers who learned their gifts early, and of an extinct race of bipedal dinosaur descendants. They also encounter warning signs of a great danger, millions of worlds away from ‘our’ Earth, causing catastrophe as it moves. The book also deals with the effects of the explosion of available space on the people of Datum Earth and the new colonies and political movements that are spreading in the wake of Step Day.
The best film – “Life of Pi”
Having read the book by Yann Martel (which I greatly enjoyed) and having see the trailer of this movie, I can’t wait to see it!
This is a magical adventure story centering on Pi Patel, the precocious son of a zoo keeper. Dwellers in Pondicherry, India, the family decides to move to Canada, hitching a ride on a huge freighter. After a shipwreck, Pi finds himself adrift in the Pacific Ocean on a 26-foot lifeboat with a zebra, a hyena, an orangutan and a 450-pound Bengal tiger named Richard Parker, all fighting for survival.

The happiest time – Well, some things I have to keep to myself!
Have a Happy New Year!