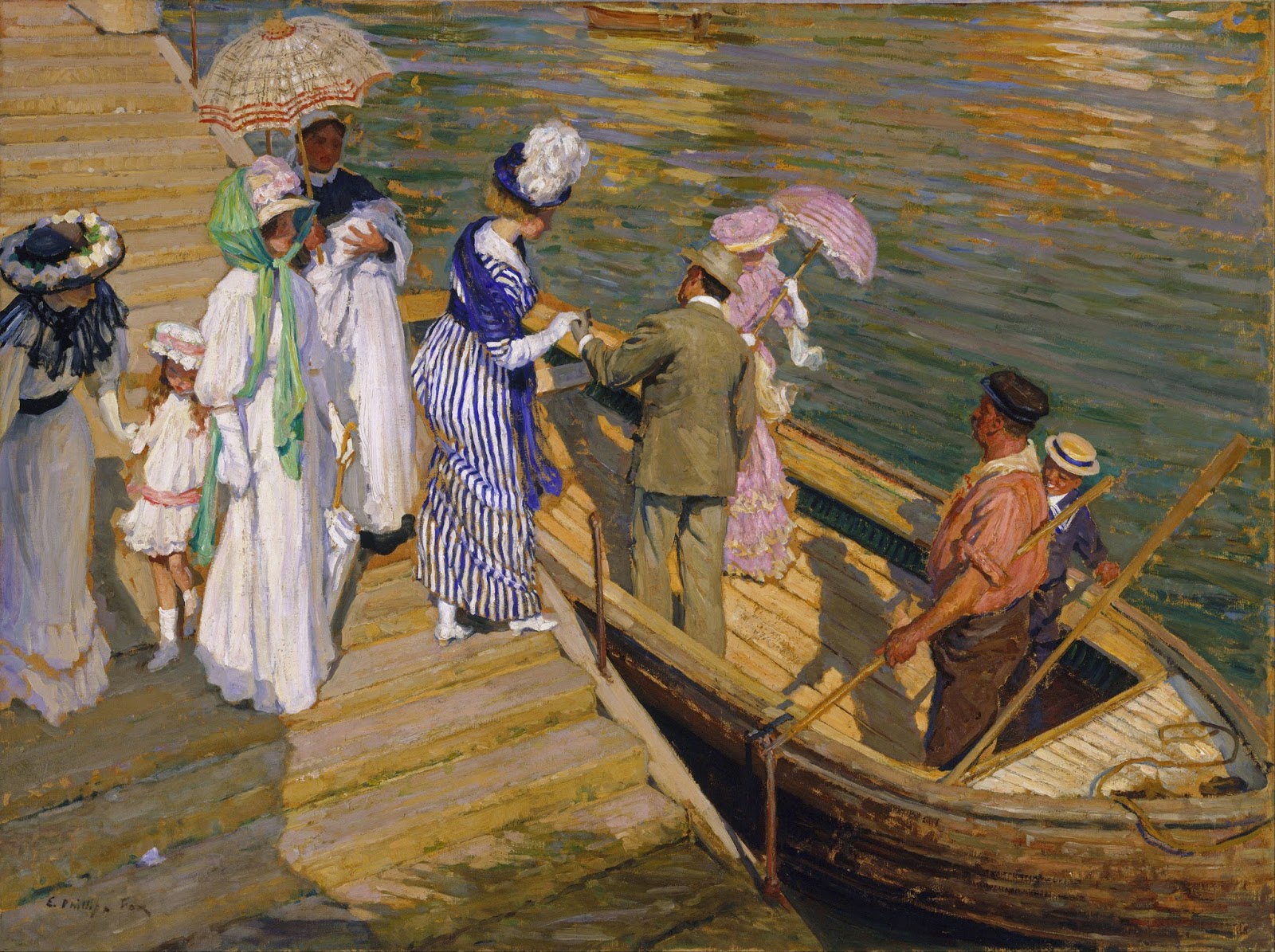 “It is during our darkest moments that we must focus to see the light.” - Aristotle Onassis

Emanuel Phillips Fox (1865–1915) was an Australian Impressionist painter. He was born on 12 March 1865 to Alexander Fox and Rosetta Phillips at 12 Victoria Parade in Fitzroy, Melbourne, into a legal family whose firm, DLA Phillips Fox, still exists. He studied art at the National Gallery School in Melbourne from 1878 until 1886 under G. F. Folingsby; his fellow students included John Longstaff, Frederick McCubbin, David Davies and Rupert Bunny.

In 1886 he travelled to Paris and enrolled at the Académie Julian, where he gained first prize in his year for design and École des Beaux-Arts (1887–1890), where his masters included William-Adolphe Bouguereau and Jean-Léon Gérôme, both among the most famous artists of the time. While at Beaux Arts, he was awarded a first prize for painting. He was greatly influenced by the fashionable school of en plein air Impressionism. He exhibited at the Paris Salon in 1890, and returned to Melbourne in 1891.

In October 1892, Fox opened the Melbourne Art School with Tudor St George Tucker, where he taught European ideas and techniques. He had a considerable influence as a teacher on Australian art during this period. In his brief career with the Heidelberg School, Fox was noted for his figure compositions and subdued landscapes, often painted as nocturnes, utilising a low-key palette in which the colours, although limited in range, were related to each other “with the utmost delicacy and inventiveness”, to quote Australian art scholar James Gleeson. The emphasis on landscapes may have been at least partly a response to market demand – landscapes found more ready acceptance, and Art Students, a figurative genre painting now recognised as one of his best, first exhibited at the Victorian Art Society in 1895, remained unsold until 1943.

In 1901 he was given a commission under the Gilbee bequest to paint a historical picture of "The Landing of Captain Cook" for the Melbourne gallery. One of the conditions of the bequest was that the picture must be painted overseas and Fox accordingly left for London. He explained his decision to base himself in the European art world in a 1903 letter to Frederick McCubbin: “I am quite certain that the only way is to exhibit alongside the best of the work here, and that one man shows, and colonial or Australian exhibitions in London are of very little good." Both the Royal Academy and the Salon were bastions of establishment art, remote from the modernism of Braque, Picasso and the School of Paris, and Fox's biographer, art historian Ruth Zubans, describes the Salon as celebrating elegance and femininity ...filtered through Impressionist experience and academic training.”

Fox enjoyed considerable success in Paris and London, becoming in 1894 the first Australian to be awarded a third-class gold medal at the Salon for “Portrait of my Cousin” (now in the National Gallery of Victoria). In 1905 he married Ethel Carrick, an artist of ability. They toured Italy and Spain, then in 1908 settled in Paris, where he was elected an associate of the Société Nationale des Beaux-Arts. He returned to Melbourne on a visit in that year and held a successful one-man show at the Guildhall gallery. Two years later he became a full member of the Société Nationale des Beaux-Arts, the first Australian artist to attain that honour. He was exhibiting regularly at the Royal Academy. In 1912 he was elected a member of the International Society of Painters and in the same year spent some time painting in Spain and Algeria.

In 1913 he returned to Australia, marking the occasion with an exhibition of some seventy works. The show was reported with enthusiasm in the local press, the Melbourne Argus writing: “With light and atmosphere always the ruling motive, there is revealed in his themes something of the infinite beauty discoverable in everyday things...”. The writer might have had in mind this charming and typical work titled “The Arbour”.

A final aspect of Fox’s oeuvre worth noting are his official commissions. "The Landing of Captain Cook at Botany Bay", the most important of these works, holds more than a hint of his teacher Gérôme; and every Australian might be surprised to find that Fox made a copy of Nathaniel Dance's Portrait of Captain Cook, an icon probably so ubiquitous as to have sunk unnoticed but ever-present into the national psyche. Fox died of cancer in a Fitzroy hospital on 8 October 1915. His wife survived him by 36 years, but there were no children. His nephew Leonard Phillips Fox was a prolific writer and pamphleteer for Communist and humanitarian causes.

When compared with Arthur Streeton and Charles Conder, Fox shows more fascination with the “effects of dappled light” than to the “sunny vistas” one finds in the other two painters’ Heidelberg paintings. He is described as an artist who “remained committed to a late nineteenth century aesthetic that paid homage to Impressionism while retaining the tonal values of academic realism.”

“The ferry” (1910-1911) is the artist’s masterpiece. It was developed from rapid sketches that Fox painted outdoors at Trouville, a favourite beach resort in the north of France, and was completed in his Paris studio the following winter. Fox positions the viewer as if peering down to the elegant boating party and immerses us in a sumptuous, genteel world of vibrant colours, luscious fabric textures and warm summer atmosphere. Originally exhibited in Paris and London, “The ferry” also influenced a younger generation of Australian modernist artists when it was exhibited in Sydney in 1913.
Posted by Intelliblog at 16:42