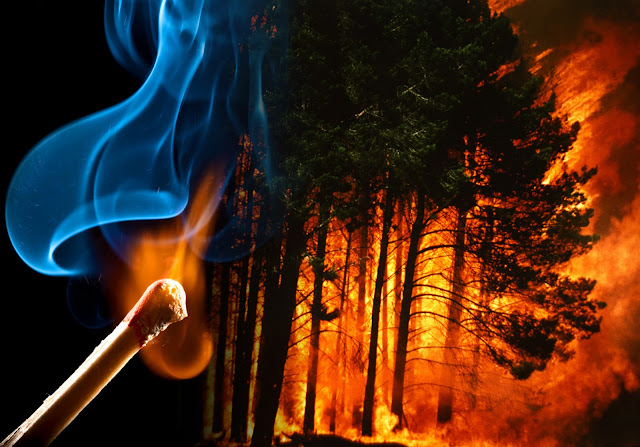 This week, Poets United has as its theme, “Fire”. Whether seen as friend or foe, fire always has to be respected as it can burn more easily than it can warm.

Bushfires in Australia are frequent events during the hot months of the year, due to Australia’s mostly hot, dry climate. Each year, such fires impact extensive areas. While they can cause property damage and loss of human life, certain native flora in Australia have evolved to rely on bushfires as a means of reproduction, and fire events are an interwoven and an essential part of the ecology of the continent. For thousands of years, Indigenous Australians have used fire to foster grasslands for hunting and to clear tracks through dense bush (see here for more details).

Major firestorms that result in severe loss of life are often named based on the day on which they occur, such as Ash Wednesday and Black Saturday. Some of the most intense, extensive and deadly bushfires commonly occur during droughts and heat waves, such as the 2009 Southern Australia heat wave, which precipitated the conditions during the 2009 Black Saturday bushfires in which 173 people lost their lives. Other major conflagrations include the 1983 Ash Wednesday bushfires, the 2003 Eastern Victorian alpine bushfires and the 2006 December Bushfires.

Victoria has seen the majority of the deadliest and largest bushfires in Australia, most notably the 2009 Black Saturday fires, where 173 people were killed, around 2,000 homes and structures were destroyed, towns were gutted, and some, such as Marysville, were destroyed. Global warming is increasing the frequency and severity of bushfires and will lead to increased days of extreme fire danger.

Perhaps the most distressing thing about bushfires is that some of them are deliberately lit by arsonists, firebugs, demented individuals who get a thrill out of seeing the flames leap up and destroy all in their path. In Australia, we fear and respect fire as it can cause destruction and death and endless misery. Firebugs have no place amongst us…

The demon lit the match and hell began
As soon as fire started in the tinder-dry bushland.
Parched earth and dead grass stretch listlessly
As heat waves shimmer in the distance
And oppressive heat mingles with the pungency of smoke.

The crackle of the flames consumes all other sounds
Leaves sublimate as the wave of towering fire touches them.
The wind roars, and the conflagration burns, destroys all,
While in its wake, nothing but ashes, blackened earth
And shells of gutted homes and stumps of trees.

The sun is red, the sky is gray in a vision of apocalypse
And as evening falls the dull infernal glow of bushfire
Colours even one’s thoughts incarnadine.
The embers fly and showers of sparks light up the sky
As fire spreads consuming all in its path.

A lack of water in the rivers of the heart,
A fire raging in the fevered brain,
Black charred remains and ashes in the soul:
The demon lights the match, the flames of hell burn on.
Posted by Intelliblog at 01:24