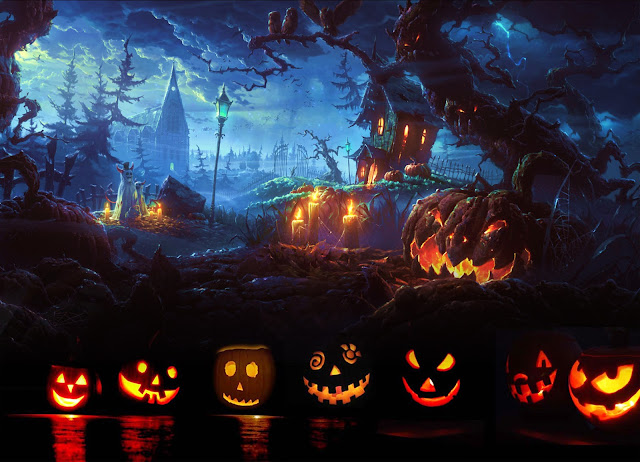 “From ghoulies and ghosties and long-leggedy beasties and things that go bump in the night, Good Lord deliver us…” – Anon Scottish Prayer.

Halloween is the last night of the Celtic year and is the night associated with witchcraft, fairies, elves and wicked spirits.  In countries where the Celtic influence is strong, customs surrounding Halloween are still current and relate to pagan rituals celebrating the beginning of the Winter cycle.  Tales of witches and ghosts are told, bonfires are lit, fortune-telling and mumming are practiced.  Masquerading is the order of the night, making of jack-o-lanterns and the playing of games pass the hours pleasantly. Bobbing for apples in a tub of water is an age-old custom.  These pagan practices have been incorporated into the Christian tradition through association with All Saints’ Day on November the first.

The seasonal association of the apple with Halloween goes back even to Roman times.  November 1st was the time when the Romans celebrated Pomona’s festival.  She was the goddess of orchards and ripe maturity.  Her festival was the time to rejoice in the fruits of the season and also the time to open up the Summer stores for Winter use.  In Celtic tradition the apple was the fruit of the Silver Bough of the Otherworld and symbolised love, fertility, wisdom and divination.  The hazel was a sacred Celtic tree and the hazelnut symbolised wisdom, peace and love.  A hazel tree grew by the sacred pool of Avalon and was described as the Tree of Life.

As Halloween was the night when witches and evil spirits, the souls of the dead and wicked fairy folk roam the earth, numerous superstitions surround the night and have as a characteristic and apotropaic (protective) function.  The fire on the household hearth should on no account be left to die on this night, or else evil spirits will descend down the chimney.  Bonfires were lit on hilltops to drive off witches. Purification by fire ordained that people jumped over the flames, in some parts even cattle driven through the embers.

In some parts many an unfortunate old woman was burnt in these fires because she was suspected to be a witch.  The fires of purification were called Samhnagan (=Samhain). Often, food offerings were left out for the fairies on this night. Travelling was to be avoided at all costs as one could be led astray by the spirits and fairies.  If one had to go out, pieces of iron or cold steel were carried on one’s person as a repellent against witchcraft.
Hey how for Hallow E’en
A’ the witches tae be seen
Some in black and some in green
Hey how for Hallow E’en.

Other traditions surrounding Samhain involved the reversal of order and normal values, the reign of chaos.  This involved deriding figures of authority, hurling abuse and cabbages at notable people, playing tricks and practical jokes on friends and relatives.  Parties of “guisers” went around from house to house collecting apples, nuts or money while riding a hobby horse or carrying a horse’s head.  The association of the horse with this festival may go back to the ancient Roman festival of the October Horse, the last of the harvest feasts. Such customs are still very active in some countries, especially the USA, where Halloween has been revived with vigour, no doubt because of its appeal but also because of commercial potential...
Posted by Intelliblog at 16:42