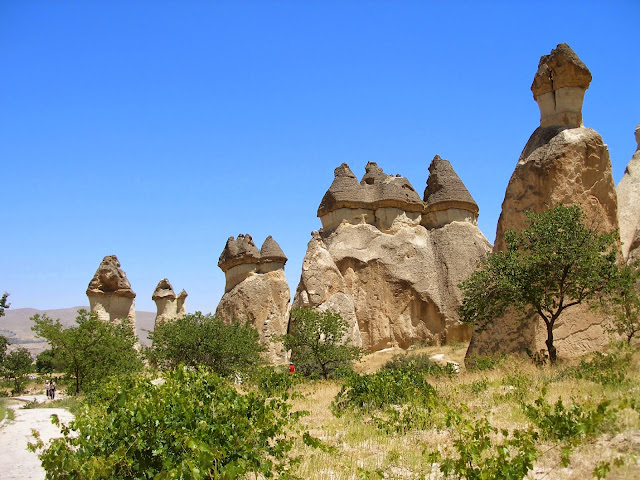 “In matters of style, swim with the current; in matters of principle, stand like a rock.” - Thomas Jefferson

Cappadocia (from Ancient Greek: Καππαδοκία) is a historical region in Central Anatolia, largely in the Nevşehir, Kayseri, Aksaray, and Niğde Provinces in Turkey. In the time of Herodotus, the Cappadocians were reported as occupying the whole region from Mount Taurus to the vicinity of the Euxine (Black Sea). Cappadocia, in this sense, was bounded in the south by the chain of the Taurus Mountains that separate it from Cilicia, to the east by the upper Euphrates and the Armenian Highland, to the north by Pontus, and to the west by Lycaonia and eastern Galatia.

The name Cappadocia, traditionally used in Christian sources throughout history, continues in use as an international tourism concept to define a region of exceptional natural wonders, in particular characterised by geological structures known as 'fairy chimneys' and a unique historical and cultural heritage.

A hoodoo (also called a tent rock, fairy chimney, and earth pyramid) is a tall, thin spire of rock that protrudes from the bottom of an arid drainage basin or badland. Hoodoos, which may range from 1.5–45 metres, typically consist of relatively soft rock topped by harder, less easily eroded stone that protects each column from the elements. They generally form within sedimentary rock and volcanic rock formations. Hoodoo shapes are affected by the erosional patterns of alternating hard and softer rock layers. Minerals deposited within different rock types cause hoodoos to have different colours throughout their height.

Add your own travel posts using the Linky tool below, and don't forget to be nice and leave a comment here, and link back to this page from your own post:
Posted by Intelliblog at 03:21