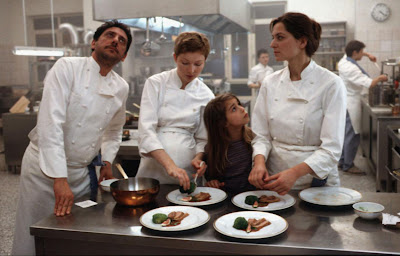 "A converted cannibal is one who, on Friday, eats only fishermen." - Emily Lotney

We watched a delightful German movie yesterday and we enjoyed it very much, even though the genre was described as belonging to the “romantic comedies”. It is Sandra Nettelbeck’s 2001 film, “Bella Martha” (“Mostly Martha” its English title). Firstly, this is not a shallow romantic comedy as defined by Hollywood and if you are in search of belly laughs, slapstick humour and grating, shallow, sexual innuendos, this film is not for you. Instead, there are scenes that are amusing, that will make you smile, perhaps laugh, but also scenes full of pathos and emotion that is straight from the heart.

The film title’s Martha is a successful head chef in her 40s in the plush (and expensive) Lido Restaurant in a dreary German port city. Martha is a perfectionist and her whole life revolves around food and cooking. Her uncompromising and precise art in cooking is carried over to her home life which appears she has structured it in such a way so as not interfere with her job. Martha’s existence is regulated, predictable, clinically controlled. Her boss and restaurant owner, Frida, compels Martha to see a therapist as the chef has problems dealing with customers who will not appreciate the food she prepares for them (one of the funniest scenes in the movie is the “this-steak-is-overcooked” scene…).

Martha’s clockwork-like existence is thrown into disarray when she has her 8-year-old niece thrust into her care. The girl is headstrong and deals with huge emotional and psychological issues, and to Martha’s consternation, the niece will not eat, anything! Add to that the new chef that has been employed by Frida (contrary to the agreement she had with Martha that only Martha would employ kitchen staff!). This new chef is Mario, an Italian of sunny disposition and quite the opposite in his approach to cooking compared to Martha’s clinical precision.

I found the movie extremely involving, even though the story-line was very simple, even predictable. As Martha says in one of her monologues about food: “To test the mettle of a good chef give them something extremely simple to prepare. The way they cook that dish will prove how good they are…” The dialogue and acting were extremely good, the gamut of emotions displayed by the characters sensitively portrayed and so real – no overacting, no clichés, no histrionics or hamming it up.

Martina Gedeck who plays Martha is a fantastic actress and she acts with every cell of her body. When she is on the phone listening to some bad news and she appears dumbstruck, her hands do the acting and a quiver of her little finger and the clouding of her eyes is enough to immediately make us aware of exactly what she is hearing. Young Maxime Foerste, who plays Lina, Martha’s niece is a great choice and so is Sergio Castellitto, playing Mario, the new chef. Add to that an excellent supporting cast and you have great material with which to tell your story. Sandra Nettelbeck (who also wrote the screenplay) does a sterling job directing the movie and her touch is light but incisive.

See this movie if you can get your hands on it, it is an excellent offbeat and understated movie. The acting is great, the emotions portrayed rich and genuine, the message uplifting and the humour even though understated and gentle, quite wonderful. Another bonus for me was the soundtrack, selected by Manfred Eicher (founder of ECM, the successful modern-jazz label) and it ranged from German lieder, classic vocal jazz, through to instrumental pieces by Keith Jarrett and others. Besides all of that, you get some wonderful advice about food, some recipes and a terrific feel-good ending!
Posted by Intelliblog at 22:08