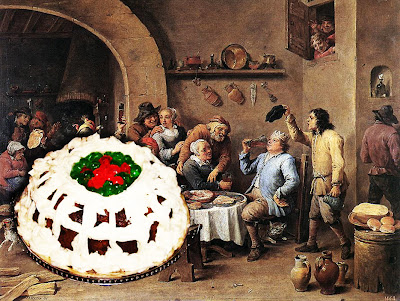 “Feast, and your halls are crowded; Fast, and the world goes by.” - Ella Wheeler Wilcox

Today is the tenth day of Christmas and in preparation for tomorrow, the Twelfth Night Cake should be made today. This is a huge recipe for a BIG cake, but remember it is a traditional one and recipes of the 19th century tended to cater for a cast of thousands. You can halve or quarter the recipe for smaller cakes:

Method
Put the butter in a warm pan and work it to a cream with your hand. Add the sugar and beat well to dissolve it, then add the spices finely ground. Break in the eggs one by one, beating well for at least twenty minutes. Stir in the brandy, the flour and work it in a little. Next add the fruit and nuts, mixing well. Put the mixture in a baking tin and put in the bean and pea in separate places. Bake in a slow oven for four hours and then ice it or decorate it according to your fancy. The man who chances upon the slice with the bean would be the King of the Bean for the Twelfth Night, while the woman who chanced on the pea would be the Queen of the Pea. If a man found the pea, he could chose the queen, and vice versa for the woman who chanced upon the bean.

The royal pair then direct the rest of the company in merriment. They assign the revelers ludicrous tasks or require them to behave in ways that are contrary to their usual roles. In France, every action of the royal pair is commented upon and imitated with mock ceremony by the entire company, who shout "the Queen drinks," "The King laughs," "The Queen drops her handkerchief!"

This twelfth night of the twelve days of Christmas is the official end of the winter holiday season and one of the traditional days for taking down the Christmas decorations. This is also a traditional day for wassailing apple trees. In southern and western England, revelers gathered in orchards where they sang to the trees, drank to their health, poured hot cider over their roots, left cider-soaked toast in their branches for the birds and scared away evil spirits with a great shout and the firing of guns.

The ancient Roman tradition of choosing the master of the Saturnalian revels by baking a good luck bean inside a cake was transferred to Twelfth Night. In Italy, the beans were hidden in focaccia rather than a cake: Three white beans for the Magi and one black one. Whoever found the black bean was made king and could choose his queen and rule the banquet. In colonial Virginia, a great Ball was held on this night. The King wins the honour of sponsoring the Ball the following year; the Queen the privilege of making next year’s Twelfth Night Cake.

If you want to celebrate Twelfth Night in an appropriately medieval way, try these instructions from Robert May in his “The Accomplisht Cook” (1665):

"Make the likeness of a Ship in paste-board, with flags and streamers, the guns belonging to if of Kickses [odds and ends], bind them about with packthred, and covere them with course paste proportionable to the fashion of a Cannon with Carriages, lay them in places convenient, as you see them in Ships of War; with such holes and trains of powder that they may all take fire; place your Ship firm in a great Charger; then make a salt round about it, and stick therein egg-shells full of sweet water; you may by a great pink take out all the meat out of the egg by blowing, and then fill it with rose-water. Then in another Charger have the proportion of a Stag made of course paste with a broad arrow in the side of him, and his body filled up with claret wine. In another Charger at the end of the Stag have the proportion of a Castle with Battlements, Percullices, Gates, and Draw-bridges made of pasteboard, the Guns of Kickses, and covered with course paste as the former; place it at a distance from the Ship to fire at each other. The Stag being plac't betwist them with egg-shells full of sweet water (as before) placed in salt. At each side of the Charger wherein is the Stag, place a Pie made of course paste, in one of which let there be some live Frogs, in the other live Birds; make these pieces of course paste filled with bran, and yellowed over with saffron or yolks of eggs, gild them over in spots, as also the Stag, the Ship, and Castle; bake them, and place them with gilt bay-leaves on the turrets and tunnels of the Castle and Pieces; being baked, make a hole in the bottom of your pieces, take out the bran, put in your Frogs and Birds, and close up the holes with the same course paste; then cut the lids neatly up to be taken off by the Tunnels: being all placed in order upon the Table, before you fire the trains of powder, order it so that some of the Ladies may be perswaded to pluck the Arrow out of the Stag, then will the Claret wine follow as blood running out of a wound. This being done with admiration to the beholders, after some short pawse, fire the train of the Castle, that the peeces all of one side may go off; then fire the trains of one side of the Ship as in a battle; next turn the Chargers, and by degrees fire the trains of each other side as before. This done, to sweeten the stink of the powder, let the Ladies take the egg shells full of sweet waters, and throw them at each other. All dangers being seemingly over, by this time you may suppose they will desire to see what is in the pieces; where lifting the first the lid off one pie, out skips some Frogs which makes the Ladies to skip and shreek; next after the other pie, whence comes out the Birds; who by a natural instinct flying at the light, will put out the candles: so that what with the flying Birds, and skipping Frogs, the one above, the other beneath, will cause much delight and pleasure to the whole company: at length the candles are lighted, and a banquet brought in, the musick sounds, and every one with much delight and content rehearse their actions in the former passages.
Posted by Intelliblog at 18:42