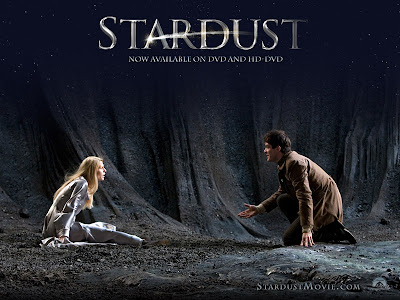 “We live in a fantasy world, a world of illusion. The great task in life is to find reality.” – Iris Murdoch

I usually hate seeing movies on airplanes. The screen is too small, the picture quality bad, the sound terrible, the lighting execrable and the interruptions legion. So I avoid it. On the flight back from Singapore, however, I could not sleep and started to watch Matthew Vaughn’s “Stardust” (2007). I was captivated as I was in that sleepless kind of mood and felt in need of a fairytale. If you have watched “The Princess Bride”, “Willow” or maybe even “Shrek”, you will enjoy “Stardust”.

The film is a fantasy for adults (which precocious children will also enjoy!) and is full of magic and witchcraft, heroes and villains, strange beasts and delightful characters. The plot revolves around Tristan, a young man on a quest to find a fallen star and bring it back to Victoria, the vain woman he loves as proof of his love for her. The star has fallen on the other side of “The Wall”, a magic doorway between England and a fairy kingdom called Stormhold.

The cast is well picked and The three I enjoyed the most was Michelle Pfeiffer, playing the evil witch, Lamia; Robert de Niro playing Captain Shakespeare, a pirate with a curious dress sense and Ricky Gervais as a receiver of stolen goods. A cameo performance by Peter O’ Toole is also a highlight and the two romantic leads Clare Danes and Charlie Cox are convincing. The film is quirky and humorous, adventurous and bewitching and just the right sort of fluff to watch when you are in that “Fairy tale” sort of mood…

I recommend it most highly!
Posted by Intelliblog at 00:34