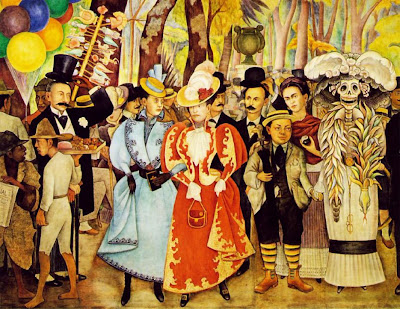 In 1923 he began painting the walls of the Ministry of Public Education building in Mexico City, working in fresco and completing the commission in 1930. These huge frescoes, depicting Mexican agriculture, industry, and culture, reflect a genuinely native subject matter and mark the emergence of Rivera's mature style. Rivera defines his solid, somewhat stylized human figures by precise outlines rather than by internal modeling. The flattened, simplified figures are set in crowded, shallow spaces and are enlivened with bright, striking colours. The Indians, peasants, conquistadores, and factory workers depicted combine monumentality of form with a mood that is lyrical and at times elegiac.

Rivera's next major work was a fresco cycle in a former chapel at what is now the National School of Agriculture at Chapingo (1926–27). His frescoes there contrast scenes of natural fertility and harmony among the pre-Columbian Indians with scenes of their enslavement and brutalisation by the Spanish conquerors. Rivera's murals in the Cortés Palace in Cuernavaca (1930) and the National Palace in Mexico City (1930–35) depict various aspects of Mexican history in a more didactic narrative style.

This is a fresco from the Alameda Hotel in Mexico City. The central section of the large mural depicting Sunday in the Park is shown here.
Posted by Intelliblog at 15:02