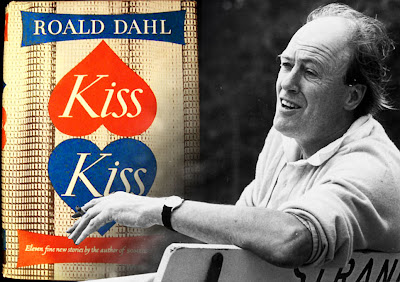 “A little nonsense now and then is relished by the wisest men.” – Roald Dahl

I have just finished a collection of short stories by Roald Dahl (1916–1990), one of the world's most beloved children's authors. He created delightful characters such as Matilda and Willy Wonka and the Chocolate Factory, but also wrote short stories for adults. The book I have just read is titled “Kiss Kiss” (first published as a collection in 1960, but most of the stories had been published earlier elsewhere). They are a delicious collection of eleven short stories, macabre and dark, but with a sense of wicked humour about them as well.

Roald Dahl was born in Llandaff, Wales, of Norwegian parents. He lost his parents at an early age and he was sent to private schools in England and Wales, at great cost to his remaining relatives who had to sell the family jewellery in order to pay for his education. However, the school system in these institutions did not impress Dahl: "I was appalled by the fact that masters and senior boys were allowed literally to wound other boys, and sometimes quite severely. I couldn't get over it. I never got over it..." he wrote.

His family experiences and terrible time he had in the private school system inspired Dahl to write stories in which children fight against cruel adults and authorities. "Parents and schoolteachers are the enemy," Dahl once said. In his story “James and the Giant Peach”, James’s parents are eaten, and his two aunts terrorise him. In “Matilda” the parents are depicted as terrible people who are completely selfish and irresponsible, while in “Witches” a beautiful woman turns out to be a wicked witch.

“My Uncle Oswald” (1979) was Dahl's first full-length novel, a bizarre story of a scheme for procuring and selling the sperm of the world's most powerful and brilliant men. Dahl received three Edgar Allan Poe Awards (1954, 1959, 1980). In 1982 he won his first literary prize with “The BFG”, a story about Big Friendly Giant, who kidnaps and takes a little girl to Giantland, where giants eat children. In 1983 he received World Fantasy Convention Lifetime Achievement award. Dahl died of an infection on November 23, 1990, in Oxford.