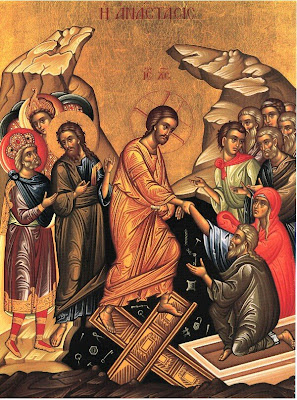 The icon of the Anastasis – the Descent of Christ into Hell and His Resurrection – is a sacred image that was created and developed by Christian artists of the Orthodox Byzantine Church. It is one of the favourite themes in Eastern Christian Art and the traditional Byzantine icon for the Resurrection. The Anastasis image was created in the late seventh century and continued to evolve until it reached its final form in the eleventh century.

The Liturgy of the Hours, evolved over the whole lifetime of the Orthodox Church is a source of the iconography of the Resurrection. It is rather difficult to ascertain which came first, the Liturgy of the Hours prayers, or the awareness of the Anastasis event. What is certain however is that there are many references to the Anastasis event in the Liturgies of Great and Holy Saturday of both the Western Latin Church and the Eastern Orthodox Churches.

In the Matins of Great and Holy Saturday, the priest chants:
“O Messiah, Jesus, Whom are you seeking in the depths of hell? Hell’s foundations quaked and trembled, seeing You Opening the graves of mortal men. When devouring Hades Engulfed the Rock of Life, In great pain he burst asunder, And the dead, held captive from all ages Were released.”

Christ, standing on the broken gates of hell and the scattered symbols of sin’s enslavement, takes both Adam by the hand and hauls him out of his tomb, with Eve watching awe-struck behind him. It is a very dynamic image. Christ’s knees are bent but he is not walking in either direction. Rather, the sense of movement is up. The action is all Christ’s. Adam and Eve are being pulled from their tombs towards Christ and towards redemption.

John the Baptist and King David (left) as well as angels and other figures from the Scriptures watch the miracle of the resurrection in acknowledgement of Christ’s divinity, their gestures an affirmation of the miracle they are witnessing.