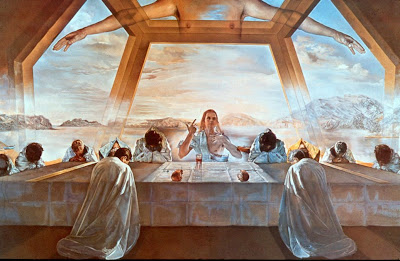 “To forgive is to set a prisoner free and discover that the prisoner was you.” - Lewis B. Smedes

This week is Holy Week for the Orthodox people and Orthodox Easter is this Sunday. Today is Maundy Thursday or Holy Thursday, which is the Thursday before Easter Sunday, observed by Christians in commemoration of Christ's Last Supper. The name Maundy is derived from mandatum (Latin, "commandment"), the first word of an anthem sung in the liturgical ceremony on that day. Another derivation is from the Latin mundo, "I ritually cleanse," referring to Christ's washing the feet of the apostles.

In many churches, the Eucharist is celebrated in a liturgy that includes Holy Communion. During the Roman Catholic liturgy, the ceremony of the washing of the feet, or pedilavium, is performed: the celebrant washes the feet of 12 people to commemorate Christ's washing of his disciples' feet. In England a custom survives of giving alms ("maundy pennies") to the poor; this recalls an earlier practice in which the sovereign washed the feet of the poor on Maundy Thursday. In most European countries, the day is known as Holy Thursday.

The feast of Maundy (or Holy) Thursday solemnly commemorates the institution of the Eucharist, where Christ blesses bread and wine which miraculously transubstantiate .This is the oldest of the observances peculiar to Holy Week.

Eucharist |ˈyoōkərist| noun
The Christian ceremony commemorating the Last Supper, in which bread and wine are consecrated and consumed.
• the consecrated elements, esp. the bread.
The bread and wine are referred to as the body and blood of Christ, though much theological controversy has focused on how substantially or symbolically this is to be interpreted. The service of worship is also called Holy Communion or (chiefly in the Protestant tradition) the Lord's Supper or (chiefly in the Catholic tradition) the Mass. See also consubstantiation , transubstantiation .
DERIVATIVES
Eucharistic |ˌyoōkəˈristik| |ˈˈjukəˈrɪstɪk| |-ˈrɪstɪk| adjective
Eucharistical |ˌyoōkəˈristikəl| |ˈˈjukəˈrɪstəkəl| |-ˈrɪstɪk(ə)l| adjective
ORIGIN late Middle English : from Old French eucariste, based on ecclesiastical Greek eukharistia ‘thanksgiving,’ from Greek eukharistos ‘grateful,’ from eu ‘well’ + ‘offer graciously’ (from kharizesthaikharis ‘grace’ ).

Salvador Dalí’s 1955 painting of “The Last Supper” is shown above.
Posted by Intelliblog at 01:17