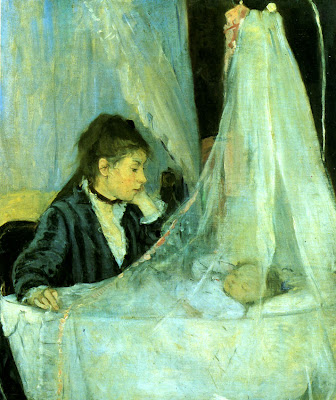 “God could not be everywhere, and therefore he made mothers.” - Rudyard Kipling

Berthe Morisot (born Jan. 14, 1841, Bourges, France - died March 2, 1895, Paris) was a French painter and printmaker. She was the first woman to join the circle of the French impressionist painters and she exhibited in all but one of their shows. Despite the protests of friends and family she continued to participate in their struggle for recognition. Born into a family of wealth and culture, Morisot received the conventional lessons in drawing and painting. She went firmly against convention, however, in choosing to take these pursuits seriously and make them her life's work.

Having studied for a time under Camille Corot, she later began her long friendship with Edouard Manet, who became her brother-in-law in 1874 and was the most important single influence on the development of her style. Unlike most of the other impressionists, who were then intensely engaged in optical experiments with color, Morisot and Manet agreed on a more conservative approach, confining their use of color to a naturalistic framework. Morisot, however, did encourage Manet to adopt the impressionists' high-keyed palette and to abandon the use of black. Her own carefully composed, brightly hued canvases are often studies of women, either out-of-doors or in domestic settings. Morisot and American artist Mary Cassatt are generally considered the most important women painters of the later 19th century.

Here is one of Morisot’s canvases, entitled “The Cradle” (1872), very apt for Mother’s Day.

Happy Mother’s Day to all mums!
Posted by Intelliblog at 01:38