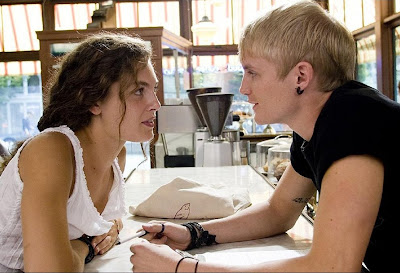 I have been travelling for work today and Brisbane was the destination. The day there was rainy and warm, with the muggy weather being a good enough reason for staying inside, as if the meetings scheduled weren’t reason enough. We have been trying to limit travel as much as possible at work, to economise on our expenses. The financial crisis is an ever-present concern at the moment everywhere. However, sometimes travelling is unavoidable and today was one of these occasions. Fortunately, the trip went well and there were some favourable outcomes from the travel, justifying the expense.

At the weekend we watched a couple of films as there was nothing on TV and we really needed to relax and veg out for a while. Last week was certainly a packed week so watching a couple of films was a good way of trying to get our mind off things and rest the weary bones. That’s not to say we didn’t work in the garden for a while and get a few chores done out and about.

The film I’ll review for Movie Monday is an interesting little film, which was pleasant enough to watch, but not exceptional. I could see it working better as a novel, although it was OK to watch while relaxing and not wanting to tax the neurons too much. It was Robert Benton’s 2007 “Feast of Love”. Morgan Freeman, Greg Kinnear, Radha Mitchell, Billy Burke, Selma Blair, Alexa Davalos, Toby Hemingway and Stana Katic were an able enough cast and could cope well with the predictable plot and rather stolid direction. As a B-grade movie it was well made and maintained interest. However, as a work of art or ground-breaking challenging cinema, it was not amongst my list of great films of all time. There was a genuine attempt by the film-maker to try to make it a little more than it was, but frankly, it felt short of being an emotionally involving experience or a memorable, “must-see” film.

The plot takes place over an 18-month period in Portland, Oregon, and looks at several couples during the course of coupling and uncoupling, recoupling and becoming otherwise intermeshed in all sorts of relationships. The eight couples involved explore modern relationships and deal with some unconventional ones, or portray some problems that may be all too common in our society. There are themes of infidelity, lesbianism, romanticism, true love, sex, death, drugs, grief, parenthood, marriage, companionship, and the conflicting views of the perception of love, as either a mystical experience full of emotional fulfilment and the sole redeeming force of our human existence, or alternatively, the concept of love as a genetically programmed incitement to sex and procreation, in order to perpetuate the species.

Morgan Freeman, a good actor, has some difficulty with his rag-bag role and some of his lines full of homespun wisdom, often sounded somewhat corny and trite. Depends on your mood at the time, I guess. Greg Kinnear is cast as a great romantic, one whose ideal woman shares his idealistic view of relationships, love and marriage, but one who unfortunately chooses the wrong woman again and again. The young couple played by Alexa Davalos and Toby Hemingway were my favourite characters, the ones who were the most believable in all their frailty, innocence and vulnerability. They managed to elicit the greatest feeling of sympathy and interest in me and they were pivotal in the film’s plot.

I wouldn’t go out of my way to search for and find this film to watch it, but if it chances to be on TV or on cable and you have a spare 97 minutes, then by all means settle down, relax and let it wash past you. There are some redeeming features and as a B-grade feature, it has a good enough mix of comedy, drama, romance and action to keep you interested, but don’t expect a life-changing experience or an emotional tour-de-force.

(Just in case you are wondering what the other film we watched was, it was the 2002 action thriller, “The Bourne Identity”. Great boys’ own adventure, cloak and dagger stuff with a whole lot of mindless action, great car chases and special effects. Nevertheless quite watchable and engaging escapist nonsense with some great locations to boot! Told you this weekend was one for unwinding and relaxation…)
Enjoy your week!
Posted by Intelliblog at 01:58