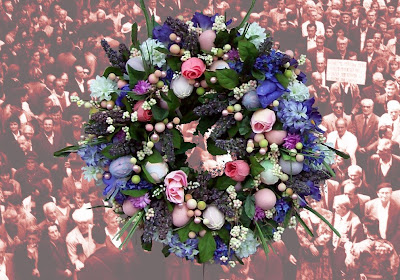 Today is May Day, which for many people has come to symbolise the ideals and aspirations of workers all around the world. It is a public holiday in many countries, being celebrated as a Labour Day, commemorating the fight for the eight hour working day. This is the reason May Day called International Workers’ Day. The idea for a “workers holiday” began in Australia in 1856. This idea spread to the rest of the world and became associated with May 1st in connection with the Haymarket affair, which occurred during the course of a three-day general strike in Chicago, Illinois that involved workers of many kinds.

An incident at the McCormick Harvesting Machine Co. plant, in which police opened fire and killed four strikers was the reason for a rally to be organized the next day at Haymarket Square. Even though things started peacefully enough, as police moved in to disperse the event, an unknown person threw a bomb into the group of policemen. A dozen people died, including seven policemen. A sensational trial followed in which eight defendants were tried for their political beliefs, and not necessarily for any involvement in the bombing. The trial led to the public hanging of seven anarchists. The Haymarket incident outraged people around the world and in following years, memory of the "Haymarket martyrs" was commemorated in various May Day job actions and demonstrations.

Although May Day began in the United States, the U.S. Congress designated May 1st as “Loyalty Day” in 1958 due to the Soviet Union taking on the day as a large scale Communist festival with workers marching and taking part in all sorts of labour-devoted activities. “Labor Day” is on the first Monday in September in the United States. People around the world often use May Day as a day for political protest.

In the past however, this day was traditionally a fertility festival. Young people would rise well before sunrise and go out in the countryside to gather “May”. May is any kind of blossom and greenery but especially hawthorn blossom (May-blossom), birch or rowan. Sloe or blackthorn are avoided as they are ill-omened. To leave a branch of May-blossom on a friend’s door is compliment and will them luck.
Good morning, Mistress and Master,
I wish you a happy day;
Please to smell my garland
‘Cause it is the First of May.
A branch of may I have brought you,
And at your door I stand;
It is but a sprout, but it’s well sprouted out,
The work of our Lord’s hand.

However, other gifts can be insulting!
Nut for a slut; plum for the glum;
Bramble if she ramble; gorse for the whores.

The jaunts in the countryside often ended up in the couples cavorting in the fields and more than one match was made under the observances of tradition. The Maypole is a tradition in many countries and is a relic of a fertility ritual where the Maypole has phallic associations. It is a tall pole adorned with greenery and all kinds of flowers. Ribbons are fixed to the top and hang down to the ground. Men and women each take hold of a ribbon and proceed to dance around the pole to the strains of joyful music.

The dew from the hawthorn tree, Crataegus monogyna, was thought to make young girls beautiful if they washed with it on May morn:
The fair maid who the first of May,
Goes to the field at break of day
And washes in dew from hawthorn tree
Will ever after handsome be.

In Greece, on May Day people go out into the countryside in order to have a good time, pic nic and gather flowers. The season is symbolised by Spring flowers gathered in the morning and brought home in order to be woven into a wreath, which will adorn the front door of the house. The wreath is left to dry on the door, not to be taken down until Midsummer’s Day when it is ritually burnt in St John’s Fires.
Posted by Intelliblog at 02:12