THE FOUNTAIN OF YOUTH 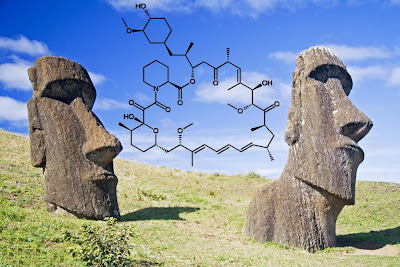 “Age is an issue of mind over matter. If you don't mind, it doesn't matter.” - Mark Twain
Rapa Nui is the indigenous name of Easter Island, a Polynesian island in the southeastern Pacific Ocean, at the most southeastern point of the Polynesian triangle. It is a special territory of Chile annexed in 1888. Easter Island is most famous for its monumental statues, called moai created by the Rapanui people. It is a world heritage site with much of the island protected within the Rapa Nui National Park. An interesting drug which is currently in the news is rapamycin (also called sirolimus). It is an immunosuppressant drug that is used to prevent rejection in organ transplantation (especially useful in kidney transplants).

Rapamycin is a macrolide, drug that was found to be a product of the bacterium Streptomyces hygroscopicus in a soil sample from Easter Island (Rapa Nui, hence the name. The drug was first used as an antifungal antibiotic. However, this use was stopped when it was discovered that it had very potent immunosuppressive and anti-proliferative properties. That is it prevents the rejection of transplanted tissue and also it can reduce the growth of cancers.

A study was published yesterday as a letter to the prestigious journal Nature and it indicates that rapamycin can prolong the life of mice, and I quote from the article:

“…rapamycin fed to mice beginning at 270 days of age also increased survival in both males and females, based on an interim analysis conducted near the median survival point. Rapamycin may extend lifespan by postponing death from cancer, by retarding mechanisms of ageing, or both.”

The increase in lifespan is up to 38% in mice. If this increase in lifespan were translated to human years, it might allow humans to easily live more than a hundred years. The elusive youth serum has been found? The experimental data is certainly highly suggestive, but it may well be more than 5-10 years before we see it on the pharmacy shelves. The interest in its anti-ageing effects may speed up research, there is big money in this.

Other drugs may be used as agents for extending life. For example, resveratrol isolated from grape pips (yes, you should eat them together with the grapes!), which has also prolonged life in lab mice. Resveratrol is now a common ingredient in vitamin supplements and heath food store merchandise. Other research looks at identifying what precisely cause some animals to live longer than others. It appears that bats, for example, live longer because of the way their proteins are constructed.

Human beings have been searching for the “fountain of youth”, the “philosopher’s stone”, the “aqua vitae”, the “elixir of youth” for thousands of years. Every culture has legends about perpetual youth and how to attain it. It is a reaction against our mortality, against the ravages of age that manifest themselves all too soon. It is a psychological weapon against the host of terrible disease that become so very much more common the older we get. The Fountain of Youth is the legendary spring that reputedly restores youth in anyone who drinks of its waters. Florida was described as its location and the Spanish explorer Juan Ponce de León, Puerto Rico's first Governor, is associated with its search. He was searching for the Fountain of Youth when he travelled to Florida, which he thought to be an island. He explored Florida in 1513 but never found the elusive fountain.

The scientists investigating Rapamycin may be like Ponce de Léon. Rapamycin can have serious side effects, because of its immune suppressant properties. Long term consumption can make users susceptible to opportunistic infections. It has also been linked to hyperlipidaemia (high levels of triglycerides in the blood), which can lead to heart disease. It's unclear whether these problems would counteract any longevity benefit that rapamycin might provide in humans.

Interesting, considering what may lie around the corner. A prolongation of life, a reduction in cancer incidence, a healthier old age. At the same time, we must learn to accept the idea of senescence, of death, of our own mortality…