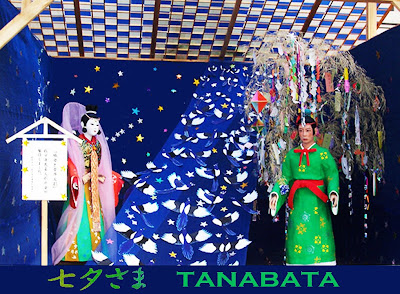 “Every man prefers belief to the exercise of judgment.” - Seneca

The Hoshi Matsuri is a Shinto festival celebrated in Japan today. It commemorates the two Tanabata lovers who were separated by a raging river. Magpies took pity on them and formed a living feathered bridge across which the two lovers were reunited. The lovers were fixed in the firmanent as stars (Cowherd Star [Altair] and Weaver Star [Vega]), but unfortunately, still separated by the Milky Way. They get together once every year on the seventh day of the seventh month. Japanese families tie samples of their children’s handwriting to bamboo poles and offer them to the lovers in hope of improving their children’s script. This has evolved from an ancient Chinese myth to which the following Chinese poem alludes:

The Seventh Night of the Seventh Month
To “Magpie Bridge”

Sparse clouds and faintly glowing moon–
Where can the bridge be built?
Surely the magpies are many and the crows few.
Between the mortals a nightly sharing of the net curtains,
But alas! How quickly does wedded bliss grow cold.
For a whole year there is the grief of separation,
And now in early autumn there is the glad reunion.
All through this night the two stars dread the coming of dawn
And I ask: “Had they not been separated by the Milky Way,
How could they have felt the full joy of their reunion?”

Shinto is an ancient Japanese religion, which is believed to have started at about 500 BCE (some say even earlier). It was originally an amorphous mix of nature worship, fertility cults, divination techniques, hero worship, and shamanism. Its name was derived from the Chinese words “shin tao” (The Way of the Gods) in the 8th Century CE. Shinto has no real founder, no written scriptures, no body of religious law, and only a very loosely-organized priesthood.

Many texts are valued in the Shinto religion. Most date from the 8th century CE, for example, the Kojiki (Record of Ancient Matters), which is the the mythological history of Japan. The Gods of Shinto, which is a polytheistic religion, are said to have created Japan as their image of paradise on Earth, and placed the emperor as its true ruler. The Emperor is a direct descendant of Amaterazu, the Goddess of the Sun.

Other famous Shinto texts are the Rokkokushi (Six National Histories), the Shoku Nihongi or Nihon Shoki (Continuing Chronicles of Japan) and the Jinno Shotiki (a study of Shinto and Japanese politics and history), which was written in the 14th century

Shinto recognises many sacred places: Mountains, springs, forests, etc. Shrines are built in these places and each shrine is dedicated to a specific Kami who has a divine personality and responds to sincere prayers of the faithful. When entering a shrine, one passes through a Tori, a special gateway for the Gods. It marks the demarcation between the finite world and the infinite world of the Gods. Believers respect animals as messengers of the Gods. A pair of statues of “Koma-inu” (guard dogs) face each other within the temple grounds.

In the past, believers practiced “misogi”, the washing of their bodies in a river near the shrine. In recent years they only wash their hands and wash out their mouths in a washbasin provided within the shrine grounds. Shrine ceremonies, which include cleansing, offerings, prayers, and dances are directed to the Kami.

Kagura are ritual dances accompanied by ancient musical instruments. The dances are performed by skilled and trained dancers. They consist of young virgin girls, a group of men, or a single man. Mamori are charms worn as an aid in healing and protection. There come in many different forms for various purposes. An altar, the "Kami-dana" (Shelf of Gods), is given a central place in many homes.

Seasonal celebrations are held at spring planting, fall harvest, and special anniversaries of the history of a shrine or of a local patron spirit. A country-wide National Founding Day is held on February 11th of each year. Other festivals include: January 1st – 3rd Oshogatsu (New Year); March 3rd Ohinamatsuri (Girls' festival); May 5th Tango no Sekku (Boys' festival); and July 7th Hoshi Matsuri (Star festival). Followers are expected to visit Shinto shrines at the times of various life passages. For example, the “Three-five-seven matsuri” involves a blessing by the shrine Priest of girls aged 3 and 7 and boys aged 5 and is held on November 15th.

Many followers are involved in the "offer a meal movement." in which each individual bypasses a breakfast (or another meal) once per month and donates the money saved to their religious organisation for international relief and similar activity.

Origami ("Paper of the spirits"): This is a Japanese folk art in which paper is folded into beautiful shapes. They are often seen around Shinto shrines. Out of respect for the tree spirit that gave its life to make the paper, origami paper is never cut.

Shinto is different to most religions because of a few reasons:
One of the most recognised Shinto arts is calligraphy, the types of paper, styles of writing, inks and utensils and methods of pressures on the paper are all variables that add beauty and style to this very ancient art.
Posted by Intelliblog at 01:18