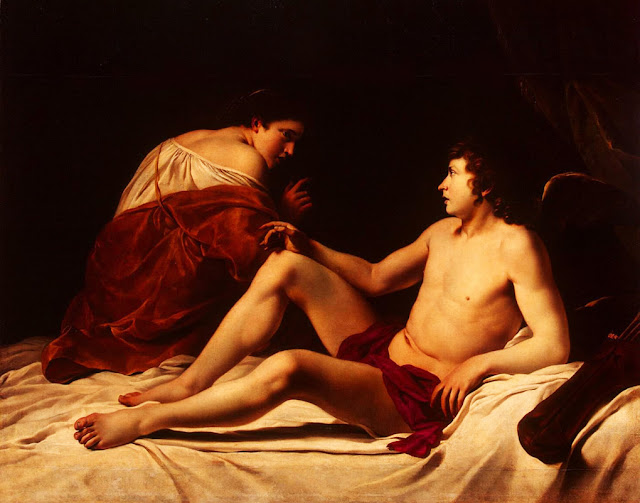 “Love must be as much a light, as it is a flame.” - Henry David Thoreau

In ancient Greece there once lived a mortal princess named Psyche who had become so famous for her beauty that mere mortals were beginning to say that she was even more lovely than Aphrodite herself. Aphrodite, the goddess of love and beauty, was jealous and angry because of this. She sent her son Eros, the god of passionate love, to shoot Psyche with one of his arrows, to make her fall in love with the most hideous monster he could find. But the Psyche’s beauty so enchanted him that he could not bring himself to carry out his mother’s command.

The oracle of Apollo at Delphi had warned Psyche’s father that she would never be the bride of an ordinary man, but rather would marry a being who flies through the night, like a terrible winged serpent, one whose power was so great that even Zeus, the king of the gods, could not withstand it. The king was told to take his daughter to a mountaintop and leave her there, so the wind could transport her to the abode of her husband.

The next morning, Psyche, her parents and two sisters made their way to the mountain. Tearfully they bade each other farewell, and then her family returned to the palace, leaving the frightened girl alone on the mountaintop. As soon as she was quite alone, Psyche felt herself lifted by a gentle breeze, which carried her far away to a beautiful palace built of marble and richly decorated with gold, silver, and precious gems. When she went inside, she found that an elaborate wedding feast had been prepared, but she saw no guests. Invisible servants began to wait on her, and in soft voices they assured her that she was mistress of the palace, and that everything in it was hers.

That night her new husband came to her, but the palace was so completely dark that she could not see him. Still, he was kind and gentle, and his words were loving and sweet. She soon fell in love with him. He promised that he would give her anything she wanted, but warned her that she must never try to see his face. If ever she should look upon his face, they would have to part, and she would then live in loneliness and misery. For many months Psyche was content to live with the husband she had come to love so dearly, but she never stopped missing her sisters. She began to plead with him to bring them to visit her. He warned her that they would cause trouble, but in the end he could not refuse his bride’s request.

The next day, when Psyche’s sisters went to the mountaintop, as they did every day, to weep over their lost sister, the wind lifted them and carried them to Psyche’s new home. When they were set down before the gorgeous palace, the sisters felt amazed at such wealth. They were even more astonished when their lost sister ran out of the palace to greet them. She explained that the palace belonged to her new husband, and now, of course, to her as well. Psyche's sisters could not help feeling jealous of Psyche’s good fortune. They began to pry and probe, and to ask questions about her husband. Although she did not want to admit that she had never seen her husband’s face, Psyche became confused and flustered under their relentless interrogation. In response to one question, she described him as having golden hair, as bright as the sun, but an hour later, she mentioned that his hair was as dark as night. These and other contradictory answers aroused her sisters’ suspicion. They pounced on her errors, crying out, “Why, you have never even seen him, have you?”

When she finally admitted the truth, her sisters reminded her of Apollo's prophecy. It didn't take long for them to persuade the confused girl that her husband must be a terrible monster who would kill her as soon as he tired of her. They concocted a plan. Handing her an oil lamp and a dagger, they told her to wait until he was asleep, and then to light the lamp and steal a look at him. If he was, as they assumed, a terrible monster, then she would have to take the dagger and kill him.

That night, Psyche took the dagger from beneath her pillow and approached her sleeping husband. She lit the lamp and gazed for the first time on her husband's face, the face of the god of love! Instead of obeying his mother’s command and making Psyche fall in love with a hideous monster, Eros had secretly taken her for his own bride. When she beheld the glory of Eros, Psyche was so startled that she allowed a drop of hot oil to land on his shoulder. Awakened by the drop of oil on his shoulder, the god said sadly, “Where there is no trust there can be no love.” Then he arose and left the palace.

Aphrodite soon learned that Eros had disobeyed her. She sought out his abandoned bride, determined to make her suffer. As soon as she found her, Aphrodite dumped a great pile of tiny seeds on the ground in front of the unhappy girl and ordered her to separate them and to finish the job by sundown!  Looking at the enormous pile of seeds, Psyche knew that the task was impossible. It would take a hundred years to sort and separate so many seeds. But a large colony of ants, beguiled by the girl’s beauty, decided to help her. Scurrying back and forth, they soon had the seeds sorted into separate piles. When Aphrodite returned and saw that the task had been completed, she became enraged and promised Psyche that her next task would be even harder.

She commanded Psyche to collect some wool from a herd of fierce man-eating sheep who lived in a thicket of thorn bushes near the river. Psyche knew it was certain death to approach the sheep, but as she drew near to the bushes where they lived, a voice told her to wait until evening, when the sheep would leave the thicket. Then she could collect the wool that had stuck to the thorns. Psyche did this, and once again Aphrodite was angry that Psyche had successfully completed a task that was meant to be impossible.

Aphrodite continued to set impossible tasks for Psyche, but somehow the girl kept managing to complete them. What neither Psyche nor Aphrodite realized was that Eros was still watching over Psyche, sending her help when she needed it.  Zeus was well aware of these events. Finally he decided that enough was enough. He decreed that Eros had proved his love for Psyche, and Psyche had proved her devotion, patience, and obedience. He said that since Eros had chosen as his bride a mortal, who could not reside with him on Mt. Olympus, there was only one course of action. Zeus would have to grant her immortality. Once Psyche had drunk the ambrosial nectar of the gods from the cup of immortality she ceased to be mortal. Aphrodite no longer felt jealous of her, for she had only resented the girl because she felt that mortals had no right to rival the gods. At last she bestowed her blessing on the union between her son and the beautiful princess who had become one of the immortals.

The painting above is by Orazio Lomi Gentilleschi (1563 - 1639) and illustrates the legend of Eros and Psyche at the point where the disappointed Eros is awakened and confronts the guilty Psyche.