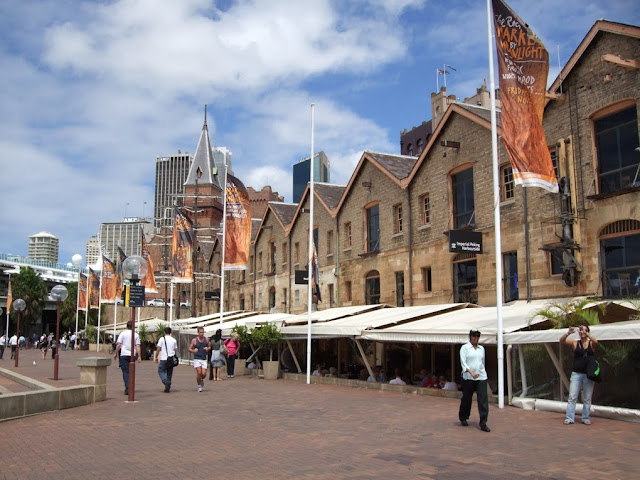 “Travel is fatal to prejudice, bigotry, and narrow-mindedness.” – Mark Twain

I had a wander through The Rocks district today. The Rocks are in Sydney’s city centre, on the western side of Circular Quay, and is the area of the first European settlement in 1788. Before the 1820's it evolved into one of Sydney Town’s most unsavoury districts, full of convicts and prostitutes, although this has changed over the centuries from slums to three-story houses.

It was in its second stage of life overtaken by warehouses and the maritime industry, but later again demolished due to the plague and then the Harbour Bridge Construction. Since the 1970’s it has developed into a tourist area, full of cobbled streets, pretty old-style buildings, numerous little shops and a lively nightlife filled with bars, pubs and restaurants.

The Rocks is also home to a variety market at the weekend, as well as live music at various venues around the area. There are a full range of stalls offering local craft and unusual gifts, as well as food stalls, Aboriginal art, and much more.

Walking tours around the area can be made by following the directions on number of guide books available at the Rocks Discovery Centre. One of the most interesting is a historical walking tour of the area. There are many stops along these tours including Sydney's first gaol, Cadman's Cottage and Sydney’s shortest street. Spectacular views of Circular Quay and Sydney Harbour Bridge are also to be enjoyed here. The oldest house in Sydney can be found in The Rocks and it is Cadman's Cottage on George Street, built in 1816. It was once home to John Cadman but now is the National Park Information Centre.

George Street is the main street through the Rocks area, which is the oldest street in the whole of Australia. There are a number of notable buildings along George Street, including Billich Gallery, the Old Police Station, the Union Bond Store, the Vault Restaurant and the nearby Museum of Contemporary Art in a stylish Art Deco building.

Just behind George Street is Kendell Lane featuring more historical buildings: The Coachhouse as well as Puppet Cottage, and at the end of Kendell Lane the lively Rocks Square. South from the Square, one can head past the Argyle Stores before arriving at Susannah Place which is a beautiful row of old terraced houses. From here there are fantastic views of the Sydney Harbour Bridge.

Tomorrow back to Melbourne!
Posted by Intelliblog at 00:12