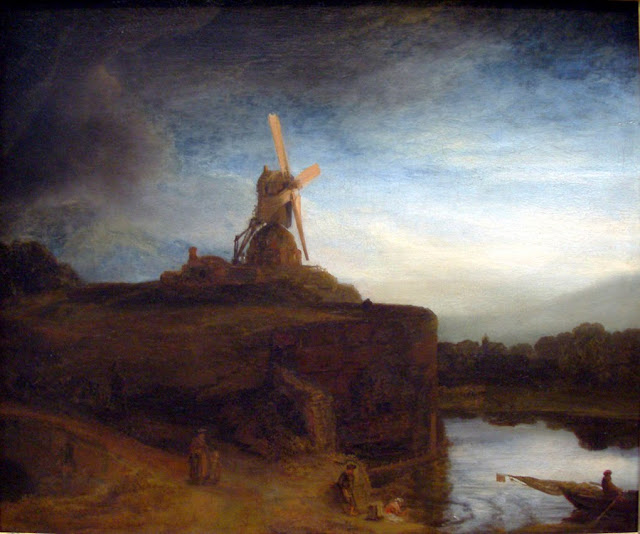 “All say, ‘How hard it is that we have to die’ - a strange complaint to come from the mouths of people who have had to live.” - Mark Twain

We have lots of paintings hanging at home, nearly all of them originals, either painted by us or by friends, a few by professional artists. We have only one print of a work by a famous painter hanging on a wall, the rest being ensconced in our numerous art books. The single print is a work by Rembrandt van Rijn, called “The Mill” and painted between 1645-1648 and now in the National Gallery of Art in Washington D.C. Of the thousands of paintings that we like, one may ask why choose that particular one to buy and hang up on the wall?

Rembrandt is a consummate painter, there is no doubt of this, and his works represent a high point in western painting. His portraits (including his self portraits) and figure paintings are the major part of his oeuvre and this particular painting represents an exception in terms of genre and subject. It is, however, a masterpiece. When we visited the National Gallery in Washington we were overjoyed to see this work and stood transfixed to admire it. The recent restoration and cleaning has converted a dark and golden work that carried the patina of centuries into a lighter picture full of more detail and revealed a magnificent sky, which is now creamy and bluish-gray, as opposed to the dark golden brown before the restoration.

Windmills were widespread in Holland in the past and as well as the usual function that one associates with them (the grinding of barley and wheat into flour), in the Netherlands the mills were also used to pump water and reclaim land. Mills were very special to the Dutch and they were symbolic of the battle for existence and the provision of staples of diet, as well as symbolic of the battle against the sea and the expansion of the land. Further to this, for Rembrandt the mill symbolised his origins, as his father was a barley miller.

The Mill sits majestically on a hilly promontory on a river and its sails catch the light of the setting sun, which make them golden yellow. These tonal values contrast beautifully with the blue-grays of the sky and the sunlit mill further contrasts with the ominous stormy clouds on the left. Three groups of figures on the foreground provide interest. On the left, a mother and child; in the middle two washerwomen; and on the right, a boat and its occupant, an older man – Charon-like, as if on the Styx… Living figures representing three ages: Childhood, young adulthood, maturity. As the sails of the windmill turn, so does time pass and such as life is, it fleetingly disappears as death approaches. Much like the fleeting rays of the setting sun, or the blue of the sky obscured by the storm clouds that will cover it.

The river separates the foreground and the background and mirrors the sky. “As is above, so it is below” – the cosmic order of the heavens is reflected in the order here on earth. The ripples in the river generated by the washerwoman, iterate the “ora et labora” dictum that is amplified by the boatman going about his work. The child watches on, learning its place in the cycle. The river flows and re-enforces the message – time passes, as in Apollinaire’s famous poem…

This is a lovely painting and one may easily become lost in its depths and meditate its mysteries. One may philosophise and ponder while gazing into its perfection. It is restrained and has limited colour palette, economical in its composition, much like the thrifty Dutch of Rembrandt’s time. I never get tired of it and like seeing it on the wall, it has become part of who I am and where I live.
Posted by Intelliblog at 02:32