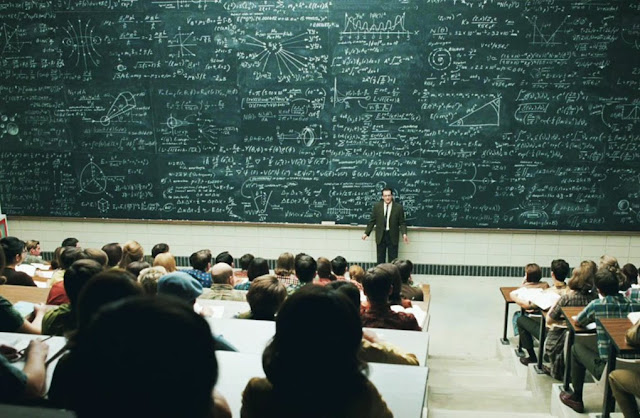 “Physics is imagination in a straight jacket.” - John Moffat

After fixing my computer problems today (it’s handy having a good computer shop with full technical support across the road from work!), I’m back and ready to roll again! I’m rather sorry I missed Movie Monday yesterday, so I’ll do my film review today as we watched an interesting film at the weekend. It was the 2009 Coen Brothers film “A Serious Man” with Michael Stuhlbarg, Richard Kind, Fred Melamed and Sari Lennick.

To enjoy the film fully, one should be aware of several things: Firstly, the Old Testament Book of Job. It relates the story of Job, his trials and tribulations at the hands of the Devil, while he is being tried by God, his discussions with friends on the origins and nature of his suffering, his challenge to God, and finally a response from God. The book addresses the problem of evil and suffering in the world, trying to reconcile this with the existence of God.

Secondly, one should be aware of the paradox stated by Schrödinger to illustrate the bizarre nature of quantum mechanics. It concerns a cat that is placed in a box with a “diabolical mechanism” that could cause the death of the cat depending on a random event, such as the disintegration of a radioactive nucleus. Schrödinger’s cat in the sealed box remains both alive and dead (as far as the universe outside the box is concerned) until the box is opened.

Thirdly, one should be aware of the concept of dualism, in its variety of interpretations. For example, the yin and yang that symbolises the duality in nature and all things in the Taoist religion. Or moral dualism, which is the belief of the great complement (in eastern and naturalistic religions) or conflict (in western religions) between the benevolent and the malignant. Most religious systems have some form of moral dualism - in western religions, for instance, a conflict between good and evil. In the philosophy of mind, dualism is any of a narrow variety of views about the relationship between mind and matter, which claims that mind and matter are two ontologically separate categories; etc.

Lastly, familiarity with the Hebrew language, Jewish religion and culture would certainly add an extra dimension to the film.

The film opens with a curious wintry vignette in 19th century Middle-Europe, where a Jewish man who has just come home converses with his wife regarding someone who helped him fix his cart. It turns out that the man who helped him has been dead for two years (or has he?). This is an illustration of Schrödinger’s cat and when the “ghost” comes knocking on their door to partake of the soup the husband has promised him, the wife does her “diabolical experiment” in order to prove the man is ghost and therefore evil. This sets the scene for the whole movie, which, however, takes place in 1960s American suburbia.

Larry Gopnick is a physics professor who is struggling to get tenure. He has a wife who has just announced to him that she will leave him for his best friend, two teenage children, a daughter who steals money from him to save up and get a nose job and a son who smokes dope and is terrorised by a bully at school. Add to that an uncle who has problems with a dripping cyst and is unemployed, and gambling and possible worse… There is a sexy neighbour who sunbathes in the nude and tempts Larry and as well as that, a Korean student who bribes Larry so that he won’t fail him.

The film is black tragicomedy and it examines in modern-day dress the trials of Larry (Job), who is attempting to maintain his faith in God amongst all the vicissitudes of life that he has to deal with. There are some wonderful scenes where the humour is subtle but quite cutting, a couple where one may laugh out loud, but also a few poignant ones. Man’s powerlessness in the face of adversity and his dependence of faith is examined, while the consideration of sin and its consequences is also explored.

I wouldn’t call this the Coen Brothers best film, but perhaps it’s the most ambitious. It is directed with verve and the cinematography is good. The atmosphere of the 1960s is well executed and the acting is excellent. One of the weak points of the movie may be seen to be the end, however, given the duality theme and the uncertainty principle exemplified by Schrödinger’s cat, the end is in keeping with the film.

I would recommend it if you are after a more cerebral comedy and if you like philosophising! Otherwise, if you want slapstick, watch the Three Stooges.
Posted by Intelliblog at 01:29