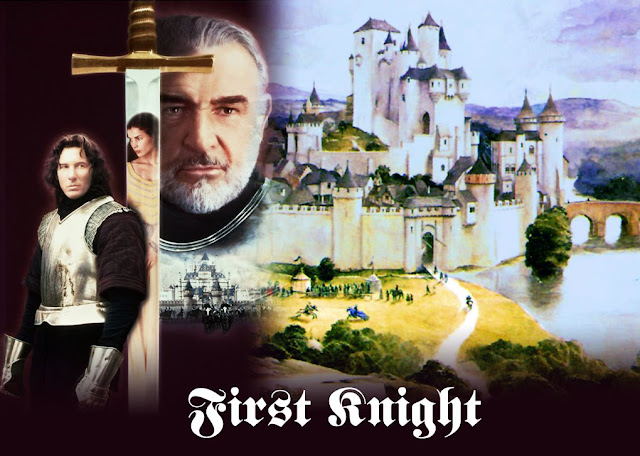 We watched Jerry Zucker’s 1995 film “First Knight” at the weekend. I had already seen it once when it was first released and I remember that I had not liked it much then. However, we had it given to us on a Bluray disc so we watched it. I must say that I was pleasantly surprised, as not only it did not grate, but it was quite entertaining. The picture quality was stunning and the sound magnificent, and this time round I did not concentrate too much on the departure from the “standard” Arthurian legends, nor did pay too much attention to the daggy costumes. The film was entertaining because of the restrained performances, the good dialogue and the winsome actors.

The first thing to say to the detractors of the film (including me many years ago!) is that the Arthurian legends are simply that – legends! There is no historical King Arthur, nor is there a Merlin or Morgan le Fay or a Mordred or an Excalibur! So if a film does not follow the “legend” it is not a departure from history, it is an interpretation, an alternative story, a retelling, if you like. This particular film does not have an ounce of the supernatural in it and as such, appears more authentic than the “usual” Arthur legends. There is a good action story behind it all and it feels more like a historical romance than a grandiose blockbuster epic reworking of a legend. However, despite the romantic story, there is action in and battle scenes and swordfights…

The story concerns an ageing King Arthur who is just returning to Camelot after having won some battles and is looking forward to a content “retirement”, deciding to marry Lady Guinevere of Lyonesse, the neighbouring kingdom. Lancelot is an orphaned young man who lives by the sword, fighting for money with his swordmanship, which he has honed to a fine entertaining art. Lady Guinevere, on her way to marry King Arthur is ambushed by the evil Sir Malagant, a fallen knight of the Round table who now wishes to subjugate both Camelot and Lyonesse, as well as making away with Guinevere. In the ambush Guinevere is captured by Malagant’s men and Lancelot who chances to be in the forest, rescues her. They fall in love, but Guinevere is honourable and sees in Arthur not only a noble a husband, but also a protector for her beloved Lyonesse. Lancelot and Guinevere part, but only temporarily because Lancelot turns up in Camelot on her wedding day and earns the right of a kiss, which he gallantly foregoes and makes a friend of Arthur. Many more adventures follow in which Malagant, Arthur and Lancelot feature prominently. Who will win the heart of Guinevere in the end?

The movie is filled with incident and there are some gorgeous landscapes. My favourite is the view of Lyonesse with a windmill in the foreground which looks like an old Flemish painting, with due credit to Adam Greenberg, the cinematographer. Camelot is rendered nicely, although looking rather fake and I have already mentioned the shortcomings of the costumes. The music is suitably rousing and tender as befits the scene but one expects that of a Jerry Goldsmith score. Jerry Zucker does a good job with directing this movie, considering his forte is really comedy (“Flying High”, “The Naked Gun”, “Ruthless People”, etc).

Overall, the movie was more enjoyable this second time around and I am glad that I gave it a second chance. If you are a purist and seek a true to the legend Arthur, this film is not for you. Rather it is a good “film inspired by” the Arthurian legends and should please both boys and girls...
Posted by Intelliblog at 01:23