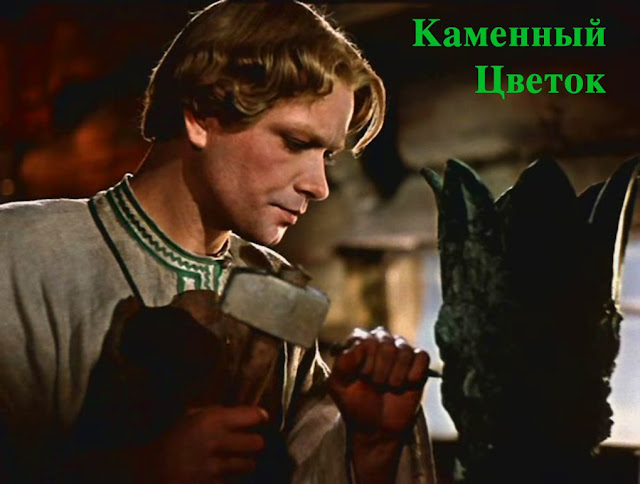 “Distance not only gives nostalgia, but perspective, and maybe objectivity.’ – Robert Morgan

Well, we have watched the film I blogged about a couple of weeks ago. As you may remember, this was the 1946 Ptushko film “The Stone Flower”. First, it showed its age and one could see it in the acting, the plot, the direction, the approach… One could see that this was a film touched by time and yet it was curiously timeless also. Second, the story which was a typical fairy tale had been translated fairly literally to the screen, and this was part of its dated charm. Third, the colour was delicate and striking in parts, which I can understand would have made its 1946 audience gasp with delight, but nowadays would only be important historically. Fourth, the film was also a cultural document, rich in folklore and traditions. The music was lovely and complemented the images well, contributing to the overall image-painting.

However, the film would not satisfy a demanding modern audience used to high definition images, millions of colours of every hue and shade, stunning computer graphics and many layers of sophisticated story-telling underlain by lush scores that were written specially to wring every shred of emotional response from a jaded audience. Comparing “The Stone Flower” against something like the 2006 film “Mirrormask” or the 2005 film “The Fall” may be like comparing apples to oranges and hence unfair, however, apples and oranges are both fruit and I am not comparing apples to cartwheels. The thing to keep in mind is that today’s audience will immediately compare everything to whatever the latest memorable film is and hence any “old” film will suffer, except if we are dealing with an “old” film which is a masterpiece or a seminally innovative and groundbreaking work.

“The Stone Flower” was not a masterpiece, but it was certainly worth watching and I would recommend it to anyone who is interested in history, folklore, movies, art, anthropology, Russia, etc, etc. It is a documentary as much as it is a piece of art and it also has a political subtext if one is familiar with the Russian politics and history of the mid-40s – It was Stalin who said at about that time: “How can you tell a fairy tale in a present-day world that pretends to be one?”. It is a significant film and I am very glad I watched it for all these reasons. However, I am glad I watched it for other reasons also…

It was interesting quizzing my parents after they had watched it again after all those years, and asking them if it was like the first time they had watched it. I wrote in my last blog about this film how both my mother and father had raved about this movie, which they had seen in the early 50s. They both said that they remembered the film differently and that somehow it seemed less bright, less colourful, less monumental than when they had seen it the first time. They expressed surprise at the acting, which they both characterised slightly “wooden” and the story, which somehow seemed to them to be somehow simplified. My father asked if the version we were watching had been cut. No, it had not been…

I was a little sorry that I had hunted down this film and had given it to my parents to watch again after all those decades. I felt terrible because I had taken a beautiful memory that had remained fresh and precious in their minds and had made them confront its reality in their now experienced and wiser years. All those intervening decades of life and maturity had made the stuff of memory and nostalgia evaporate in a few minutes, with the pleasure of the memory being all but destroyed for them. How often it is that our well-intentioned do-good instincts may actually harm more than benefit? I remarked that I was sorry that I had shattered the illusion for them, but my mother said something that stuck in my mind: “Oh, never mind, I’ll just make sure I won’t watch it ever again… I am certain that in a couple of months time, the good memory of this second viewing will re-enforce the even better memory of the first viewing. Thank you for going out of your way to find it, and I am glad you have seen it too. We now share a memory about this film, even if this memory may not be congruent at this time, however, give yourself time too…”

Funny thing about memories – time tends to blunt them, round them, polish them. Even the ugliest sharp stone will become a beautiful polished pebble if immersed in the sea and it is dashed against others as the waves repeatedly break against the shore, dragging those stones in and out. Our memories are but stones in the sea of time, whose relentless waves eventually turn them into beautiful rounded pebbles. I shall have a beautiful memory of this film – and part of that memory will be the story of how I searched for it and watched it together with people whom I love. The second part will obviously be more important as time goes by…
Posted by Intelliblog at 22:43