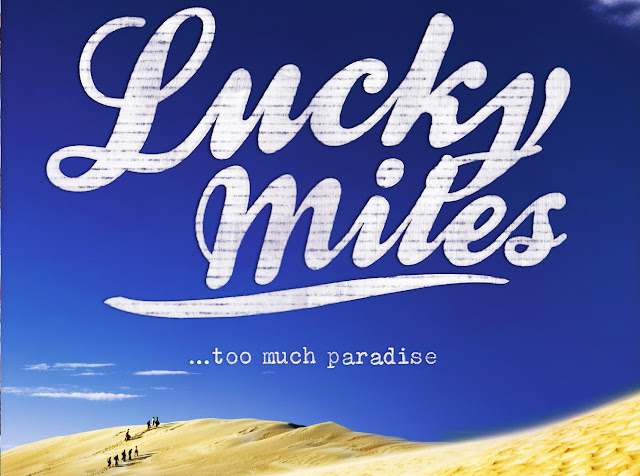 “Refugees have done more for my heart and my spirit than I can ever express in words.” - Angelina Jolie

We watched an Australian film at the weekend and it was one which caused us to stop think, debate about, share our views about it and then discuss some more. I guess that’s good! Films that make you think and that generate debate and controversy are doing what any good piece of art is meant to do. It left me with a rather mixed set of feelings and also made me wonder what the intentions of the film-makers were. There was some mixed messaging in the film and the story could have been tightened up, with the poignancy of the film considerably enhanced. However, even as it was it was a good film.

The film in question was Michael James Rowland’s 2007 “Lucky Miles”. It was like a documentary in parts, art film-like in others, conventional in other parts. The themes were topical and the issues the film broached were quite important not only for Australia and Australians, but for many other countries around the world dealing with the problem of illegal immigrants. The director co-wrote the script with Helen Barnes and it was obvious they were inspired by news items and the boat-people issues that Australia confronts on a regular basis. As the introductory blurb says in the film: “This story was inspired by true events…” or words to that effect.

The plot concerns an Indonesian fishing boat manned by people smugglers, who abandon a group of Iraqi and Cambodian men on a remote part of the North Western Australian coast. The immigrants are told there is a bus-stop on the other side of the dunes, and this represents to all of them the much-desired gold at the end of the rainbow. What the abandoned men quickly find out, however, is that they are in inhospitable, searing and dry desert about the same size as Germany! Most of the illegal immigrants are quickly caught, but two men, an Iraqi and a Cambodian, reluctantly join forces to do battle with the forces of nature. In the meantime, providence decrees that the Indonesian boat sink and the crew be washed up on the same shore that they dumped their human cargo. An Indonesian sailor joins the Iraqi and the Cambodian and all three of them begin a (dis)united! journey, each to find his goal. Their confusion, misinformation, their mistrust of one another, poor knowledge of the local terrain and conditions, as well as their misguided hopes and desires make their journey more torture-wracked than they could have imagined. To make things worse, they are pursued by a fairly incompetent army reservist unit, which more by luck than design threatens to capture them…

The actors are well-chosen and do an admirable job with the script, and the locations, the direction and the cinematography are very good. The film is a little ambiguous in its message. It challenges the viewer with its premise and confronts with the humanity of the protagonists. It is almost as if each viewer is equipped with a button strapped to the armchair. “Press it and you will destroy these illegal immigrants, do not touch it and these people may survive…” Who is the victim and who is the executioner? Who is innocent and who is guilty? Who is the one who decides whether they will stay or be made to leave? It seems that the point of the movie is to make each viewer ask these questions of himself and try and answer them in a way that will leave one’s conscience at peace.

The film touches on an important matter for Australia. Dependence of immigration for its continued growth and prosperity and the problem of illegal immigrants, many of whom are victims of unscrupulous people smugglers. Due to a perception that Australian immigration laws are weak, large numbers of would-be immigrants have paid, and are now paying, substantial sums to intermediaries who organise illegal entry into Australia. Many of these boatpeople originate from China, Afghanistan and Iraq. When they arrive within the Australian jurisdiction they commonly claim rights of entry as refugees.

They are provided with financial resources by the Australian taxpayer to pay the legal costs of arguing their cases - one estimate is that the cost of removing an illegal immigrant is, on average, approximately $60,000. Because the relevant government regulations are loose, and because the Federal Court has proved itself to be less reliable than the State Supreme Courts, many illegal immigrants have proved to be undeservedly successful before the Federal Court.

The number of unauthorised boat arrivals to Australia follows global trends. In 2001 and 2002, for example, Australia experienced a peak in the number of boat arrivals (more than 5,500 in 2001 and almost 3000 in 2002) as did most of the rest of the world. Then from 2003, global asylum numbers dropped as the level of global conflict dropped. However, over the last two years global asylum seeker numbers have increased again. When comparing 2008 figures with 2007, for example, asylum seeker numbers rose by 122% in Italy, 121% in Norway, 89% in the Netherlands, 70% in Turkey, 53% in Switzerland, 30% in Canada and 20% in France, according to a 2009 UNHCR report.

Yet in the same period, Australia saw only a 19% increase.  Australia’s numbers are small in absolute terms as well. Australia may received around 1,800 asylum seekers by boat in 2009, but this is tiny compared to other countries. Italy alone received 36,000 boat arrivals in 2008. Most asylum seekers prefer to go to the United States (who received 49,000 asylum seekers in 2008), Canada (36,900), France (35,200), Italy (31,200) and the United Kingdom (30,500).  The reason for large increases in the above-mentioned countries in 2008 is not because they have all “gone soft” on asylum seekers  It is largely because of the continuing or escalating violence in countries like Iraq, Afghanistan, Somalia, Sudan and Sri Lanka, to name but a few.

It is illogical and unfair to punish refugees and asylum seekers in the hope of deterring people smugglers. Numerous reports have shown that many asylum seekers are unaware of Australia’s domestic asylum policies, so the use of punitive policies has a negligible deterrent effect.  A clear example of the failure of punitive policies to deter asylum seekers is the policy of Temporary Protection Visas (TPVs). The number of unauthorised boat arrivals to Australia continued to increase after the introduction of TPVs in 1999 (48% more asylum seekers arrived by boat in 2001 than in 1999). Boat arrivals only started decreasing in 2003 when global asylum numbers started dropping. The same rationale holds true for mandatory detention, introduced in 1992.

Refugees are often forced to flee tragic situations such as genocide or torture. Desperate people will continue to take desperate measures to seek safety. The only way to stop unauthorised boat arrivals into Australia is to cooperate regionally and internationally to resolve conflicts and to create durable solutions for refugees so that they do not have to undertake perilous journeys to find safety. Deterring and punishing people smugglers is also a better option than punishing the victims, who are the refugees…
Posted by Intelliblog at 21:20