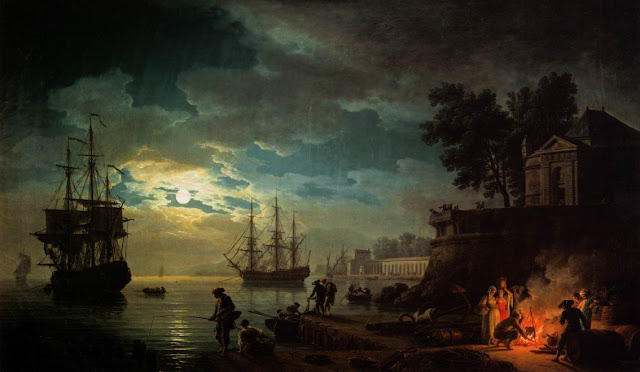 The full moon tonight is glorious and the clear sky is full of stars too. This has prompted me to present one of Claude-Joseph Vernet’s (born Avignon, 14 Aug 1714; died Paris, 4 Dec 1789) painting for Art Sunday. It is his 1771 painting “Seaport by Moonlight”. This is a very romantic work, with much contrast between great expanses of dark and the play of moonlight reflected by water and lighting up the cloudy sky, as well as the vignette of the fireside group in the right lower part of the painting. This provides two strong focal points in the painting, but they are pivoted by the ships, buildings and figures in the foreground. This is a very interesting painting and one full of mystery that fires up the imagination.

Vernet probably received his first lessons in painting from his father, Antoine, who then encouraged him to move to the studio of Philippe Sauvan (1697–1792), the leading master in Avignon. Sauvan supplied altarpieces to local churches and decorative works and mythologies for grand houses in the area. After this apprenticeship Vernet worked in Aix-en-Provence with the decorative painter Jacques Viali (flourished 1681– 1745), who also painted landscapes and marine pictures. In 1731 Vernet independently produced a suite of decorative overdoors for the hôtel of the Marquise de Simiane at Aix-en-Provence; at least two of these survive (in situ) and are Vernet’s earliest datable landscapes. These are early indications of his favoured type of subject, and Vernet would have studied works attributed to such 17th-century masters as Claude Lorrain, Gaspard Dughet and Salvator Rosa in private collections at Aix and Avignon. Three years later Joseph de Seytres, Marquis de Caumont, who had previously recommended Vernet to the Marquise de Simiane, offered to sponsor a trip to Italy. This was partly for Vernet to complete his artistic education but also to provide his sponsor with drawings of antiquities.

With Hubert Robert, he became a leading exponent of a type of idealised and somewhat sentimental landscape that had a great vogue at this time. Vernet was particularly celebrated for his paintings of the seashore and ports, and on returning to Paris in 1753 he was commissioned by Louis XV to paint a series of the seaports of France. He produced fifteen (more were planned but not executed), now divided between the Louvre and the Musée Maritime, Paris.
Posted by Intelliblog at 01:14