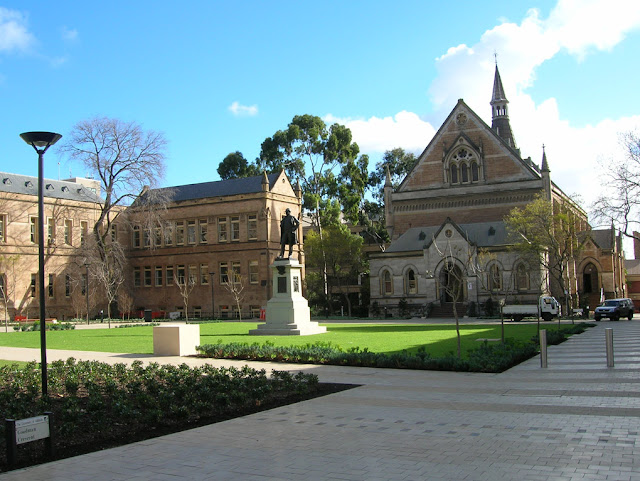 “People don’t come to church for preachments, of course, but to daydream about God.” - Kurt Vonnegut, Jr.

I am in Adelaide for work for a few days and it has already been quite hectic. Many things to do, as well as some social functions for Marketing and PR. I always enjoy visiting Adelaide, which is a gracious, beautiful small state capital city that has a distinctive atmosphere and people that are friendly, fun-loving and relaxed. Adelaide is frequently given the appellation “City of Churches” as there are so many 19th century churches around the city, almost one on every block!

Part of the attraction of Adelaide lies in the wine growing areas relatively close to the city, including the world-famous Barossa Valley where some delectable vintages are made. The Adelaide Hills, very close to the CBD provide a beautiful alternative to suburban living and there are many delightful small towns and villages that offer numerous tourist attractions for the visitor. One of my favourites is the old German village of Hahndorf, now a haven for artists and craftspeople, with many galleries, artist studios and fine gift shops.

A poem by Edith Sitwell today, resonating perhaps a little with the “City of Churches” reference:

Bells of gray crystal
Break on each bough –
The swans’ breath will mist all
The cold airs now.
Like tall pagodas
Two people go,
Trail their long codas
Of talk through the snow.
Lonely are these
And lonely am I...
The clouds, gray Chinese geese
Sleek through the sky.
Dame Edith Sitwell

Edith Sitwell was born in Scarborough, Yorkshire, on 7th September 1887 the only daughter of the eccentric Sir George Sitwell, 4th Baronet, of Renishaw Hall. She had two younger brothers, Osbert (1892-1969) and Sacheverell Sitwell (1897-1988) both distinguished authors, well-known literary figures in their own right, and long-term collaborators. Edith never married but had an association with Russian homosexual artist, Pavel Tchelitchew. The poems she wrote during the war were much praised. Many of her poems have been set to music.

In 1948 Sitwell toured the United States with her brothers, reciting her poetry and giving a reading of Lady Macbeth's sleepwalking scene, which brought her great notoriety. Her poetry recitals were always occasions; she made recordings of her poems, including two recordings of Façade, the first with Constant Lambert as co-narrator, and the second with Peter Pears.

Sitwell became a Dame Commander (DBE) in 1954. In August, 1955, Sitwell converted to Roman Catholicism and asked author Evelyn Waugh to be her godfather. Around 1957 she was confined to a wheelchair after battling with Marfan’s syndrome throughout her life. Her last poetry reading was in 1962. She died of cerebral haemorrhage on 9th  December 1964 at the age of 77.
Posted by Intelliblog at 15:47