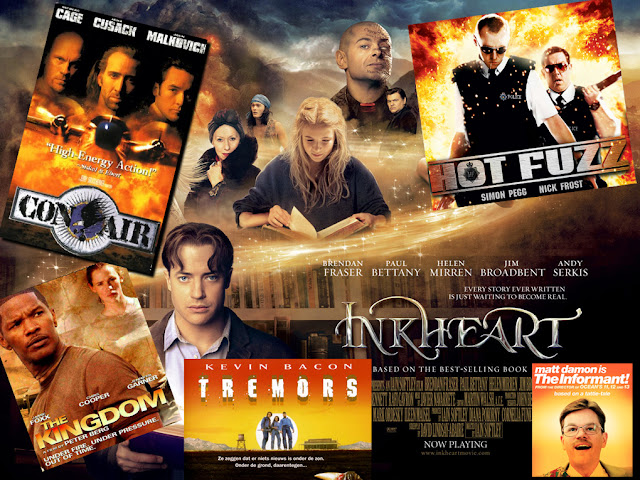 “Although for some people cinema means something superficial and glamorous, it is something else. I think it is the mirror of the world.” - Jeanne Moreau

With the holidays in full swing and the weather not exactly conducive to outdoor activities, we watched several movies and some TV over these last few days. I’ll do brief reviews of films we watched over the past two or so weeks. Some were excellent, some good and some not so good at all!

“The Informant!” (2009) Directed by Steven Soderbergh, with Matt Damon, Melanie Lynskey, Scott Bakula, Tom Papa, Kirk Schmidt. 5/10
This was a boring, uninvolving movie that had no suspense, humour, action or surprises. The characters were uninspiring and failed to evoke sympathy on any level. The story (which was true, apparently), involved corporate America’s dirty deeds in international price fixing of food additives. Just reading the plot line and going over it in my mind, I don’t know what possessed me to get this movie to watch? Maybe Steven Soderbergh and Matt Damon? What a waste of talent! Give this one a miss, unless the international lysine market and corn syrup industrial wars turn you on…

“Hot Fuzz” (2007) Directed by Edgar Wright, with Simon Pegg, Nick Frost, Timothy Dalton, Jim Broadbent, Paul Freeman. 8/10
This was an excellent British farce about he trials and tribulations of a high achieving London police officer who is too good and is showing up his peers as inadequate. For this reason he is transferred to a picturesque English village where no crime occurs, just terrible accidents! There are lots of laughs in this movie, a bit of gore and violence, but it is a send-up! Very enjoyable!

“The Kingdom” (2007) Directed by Peter Berg, with Jamie Foxx, Chris Cooper, Jennifer Garner, Ashraf Barhom, Ali Suliman, Jason Bateman, Kyle Chandler. 7/10
A terrorist attack in an American housing compound in Riyadh, Saudi Arabia results in scores of murdered families but also the demise of the spy, Francis Manner. An FBI agent, Ronald Fleury, blackmails the Saudi Arabian consul to get five days of investigation on location. He travels with agents Grant Sykes, Janet Mayes and Adam Leavitt to avenge their friend and try to find the parties responsible for the bombing. The agents face enormous difficulties in their investigation, but they are supported by Colonel Faris Al Ghazi that advises the team how to act in the unfamiliar environment. A good action movie with some graphic footage – not for the faint-hearted!

“Tremors” (1990) Directed by Ron Underwood, with Kevin Bacon, Earl Ward, Reba McEntire, Michael Gross, Finn Carter. 6.5/10
This was a comedy horror movie that did not take itself seriously for one minute. Hence its success. Underground giant wormy thingies terrorise an isolated township in the middle of nowhere and the handful of residents have to band together to overcome the terror. A bit of fun, with quite a few giggles…

“Con Air” (1997) Directed by Simon West, with Nicolas Cage, John Cusack, John Malkovich, Ving Rhames. 6.5/10
Cage plays Cameron Poe, a highly decorated US ranger, who is convicted of manslaughter after protecting his wife in a drunken brawl. After eight years, he is being paroled and is being sent home to his wife and daughter. Unfortunately, he to be a passenger on the Jailbird, which is a high security airplane that is also transporting some of society’s most vicious murderers to Feltham Penitentiary, Lousiana’s highest maximum security prison. A surprising escape is made on board the plane as the convicts seize control of the plane, and head it towards Las Vegas. The officials on the ground want to blow it out of the sky, but there is an alternative! Typical dick flick, well done, with quite a bit of action. Violent and bloody…

“Inkheart” (2008) Directed by Iain Softley, with Brendan Fraser, Andy Serkis, Eliza Bennett, Helen Mirren, Sienna Guillory. 7.5/10
A typical fantasy movie, which you should like if you also liked Harry Potter, the Narnia movies, The Lordfo the Rings, etc. I don’t particularly like Brenda Fraser, but he does a good job in this as Mortimer “Mo” Folchart who is raising his thirteen year old daughter Meggie alone after the disappearance of his wife Resa. He is an antique book restorer and travels with Meggie to find an old book called “Inkheart” in antique bookshops in Europe. When he is approached by a weird man called Dustfinger, she overhears him calling her father “Silvertongue”. Meggie discovers later that he has the ability of bringing characters out of the books to the real world. They escape from Dustfinger heading to Italy to Meggie’s aunt Elinor Loredan’s manor, where the men of the evil Capricorn abduct them with the intention of forcing Mo to bring the powerful Shadow to Earth. It’s a tale of good versus evil with special effects galore and a cute storyline.
Posted by Intelliblog at 21:31