THE VOYAGE OF THE DAWN TREADER 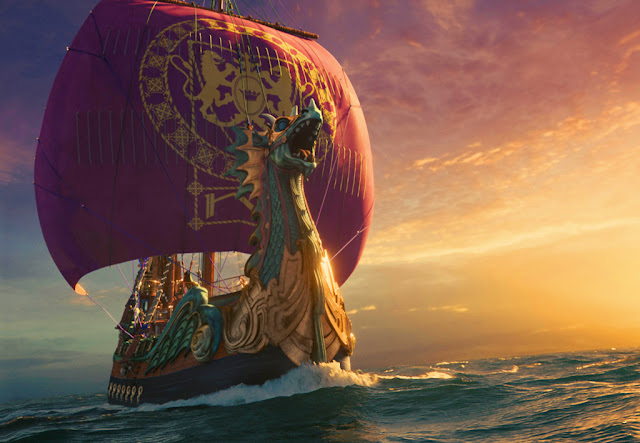 “They are ill discoverers that think there is no land, when they can see nothing but sea.” - Francis Bacon

was invited to go and see a film in 3D at the movies by a friend who had a spare ticket and so we went and saw Michael Apted’s 2010 “The Chronicles of Narnia: The Voyage of the Dawn Treader”. Firstly, I must say that I am a fan of the Narnia books by CS Lewis and that I have enjoyed the previous two movies of the books that have been brought to the big screen in the last five years –  that is, “The Lion, The Witch and the Wardrobe” and “Prince Caspian”.

“The Voyage of the Dawn Treader” is a very satisfying book and there is much thinking and philosophising in it. CS Lewis was a deeply Christian man, but his books are never obscenely proselytising or laboriously evangelic. He uses analogy, exciting stories and emotionally charged writing power in order to expound his religious views, which are kept very much in the background. Subtlety is a wonderful tool in the right hands and CS Lewis was a great intellectual as well as a great theologian, thus using it most ably. However, having said all of that, one can be a complete atheist and still enjoy both his books and the movies that have been made of them.

I still have problems with the 3D technology and I much prefer to watch a movie in 2D. 3D is still in its infancy and it is there as a gimmick. Maybe in a couple of years time the technology will be there in the background and the 3D experience will be taken for granted, as part of the entertainment package, unobtrusively and without having to have scenes in movies that are there to utilise the effect, rather than being scenes essential to the plot.

If you are not a Narnia fan, let me say a few words about the basics of the plot. Narnia is a land in a parallel universe ruled over by a godly lion, Aslan, who is the creator and destroyer of that world. The Pevensie children, Peter, Susan, Edmund and Lucy, are able to be drawn into Narnia when there is great need for their presence there. In the “Voyage” it is Edmund and Lucy only that are drawn into Narnia, together with their obnoxious cousin, Eustace. Eustace is played very well by Will Poulter and it is his character that undergoes the most amazing transformation in terms of character development and realignment of his personal credos.

The film has some amazing CGI and special effects, as well as a lot of action and a wealth of characters. The story revolves around the voyage of Caspian’s ship ‘The Dawn Treader’ and its search for the seven lost lords of Narnia. Reepicheep the valiant talking mouse also has a quest, to set sight on Aslan’s own land ‘at the end of the world’. The book is very much about personal quests and the discovery of one’s self. This is still a central theme in the movie, with Eustace having the most amazing journey of all characters. Lucy and Edmund have to do their own soul-searching and Reepicheep is the most idealistic “believer” who, unshaken, pursues his dream to its conclusion.

There is humour, psychological tension, good characterisation, excellent integration of the CGI into the live action and very good cinematography, all bringing the book to life in an amazing way. Some liberties and artistic license has been taken, because after all this is a movie and it has to obey the rules of the Box Office! If you want the real story, the true story, the intended subplot, read the book. However, as a film, it worked for me. Go and see it and don’t bother with the 3D…
Posted by Intelliblog at 21:41