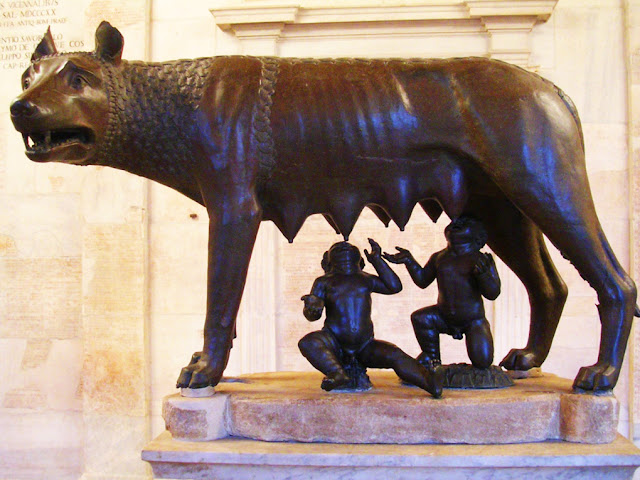 “There has to be evil so that good can prove its purity above it.” – Gautama Buddha

Today is the day that the Lupercalia was celebrated in ancient Rome. However, even the Romans of the first century were at a loss to explain exactly which deity or deities were being honoured on this day! It was an ancient observance, that survived from the days when Rome was nothing more than a few shepherds’ huts on a hill known as Palatine and was surrounded by forested wilderness teeming with wolves (lupus = ‘wolf’ in Latin). The derivation of the term ‘Lupercalia’ makes sense for a festival that was connected with a settlement of shepherds, whose most feared predator was the wolf.

Lupercus, protector of flocks against wolves, is a likely candidate deity honoured on this day. Other scholars favour Faunus, the god of agriculture and shepherds. Others still, suggest it was Rumina, the goddess whose temple stood near the fig tree under which the she-wolf suckled Romulus and Remus.  There is no question about the importance of the Lupercalia, with official records indicating that Mark Antony was master of the Luperci College of Priests. He chose the Lupercalia festival of the year 44 BC as the proper time to offer the crown to Julius Caesar.

Dionysius of Halicarnassus tells us that in his day (first century BC), an ancient hut, made out of sticks and reeds, stood on the slope of the Palatine Hill towards the Circus Maximus. This hut was honoured as a sacred place and was kept in good repair. Modern archaeology has discovered the post-holes of huts dating to the eighth century BC (the traditional date of Rome’s foundation was 753 BC). The association of wolves with Rome is also highlighted by the legend of Romulus and Remus, the twin founders of Rome, who were abandoned in a forest by a usurper to the throne and suckled by a she-wolf, only to grow and take their rightful kingship of Rome.

In general, the Romans viewed the Lupercalia as a purification and fertility rite. The ritual involved the sacrifice of goats and a dog in the Lupercal (sacred cave at the foot of the Palatine to honour the she-wolf who suckled Romulus and Remus) by priests called Luperci, who smeared the foreheads of two noble young men with the blood of the sacrificed animals and then wiped it off. At this point, the youths were required to laugh. The luperci, clothed in loincloths, then ran about the area, lashing everyone they met with strips of skin from the sacrificed goats. Young wives were particularly eager to receive these blows, because it was believed that the ritual promoted fertility and easy childbirth. These ceremonies were accompanied by much revelry and drinking. Valentines’ Day is probably a continuation of the fertility aspect of the Lupercalia.

The Lupercalia was so popular that it survived the onset of Christianity, but in a different form. In 494 AD, the Pope made February 15 the feast of the Purification of the Virgin Mary, thus perpetuating the festival and preserving the purification aspect of the ancient holiday. This of course has occurred with many other pagan feasts and festivals which have been syncretised with the Christian tradition.
Posted by Intelliblog at 16:44