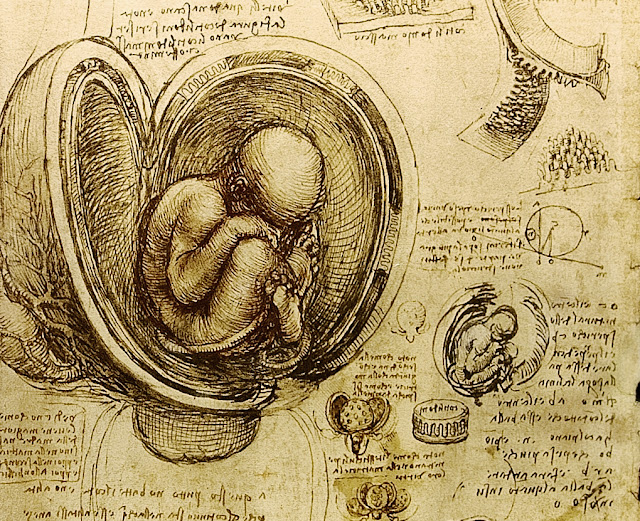 “Artists are just children who refuse to put down their crayons.” - Al Hirschfeld

It was Leonardo da Vinci’s birthday last Friday, so it is only fitting that Art Sunday is dedicated to him. Leonardo di ser Piero da Vinci was born April 15, 1452, Anchiano, near Vinci, Republic of Florence and he died May 2, 1519, Cloux (now Clos-Lucé), France). He was an Italian Renaissance painter, sculptor, draftsman, architect, engineer, and scientist. It is recorded that not only was he a polymath but also a man of exceptional physical beauty, with an attractive personality and a great singing prowess. The profound depth of his character can be guessed at from the manner in which he had compassionately tended to a dying person and then cut open the same person after his death for making anatomical studies. Apart from his scientific contributions, he also made meticulous studies and recorded his observations in writing and drawing on such varied subjects like plant growth, rock formations, atmospheric conditions, flow of water, draperies, animals, human faces and emotions etc. He was more prolific in his drawings than in his paintings though some of his paintings are believed to have been lost due to his rash painting experiments. His now world renowned fresco “The Last Supper” had started to deteriorate just a few years after he had completed it.

Leonardo’s exquisite portrayal of the human figure was supported by his anatomical studies. His formal training in the anatomy of the human body began with his apprenticeship to Andrea del Verrocchio, this master insisting that all his pupils learn anatomy. As an artist, he quickly became master of topographic anatomy, drawing many studies of muscles, tendons and other visible anatomical features. As a successful artist, he was given permission to dissect human corpses at the Hospital of Santa Maria Nuova in Florence and later at hospitals in Milan and Rome. From 1510 to 1511 he collaborated in his studies with the doctor Marcantonio della Torre.

Leonardo made over 200 pages of drawings and many pages of notes towards a treatise on anatomy. These papers were left to his heir, Francesco Melzi, for publication, a task of overwhelming difficulty because of its scope, and Leonardo’s highly idiosyncratic writing. It was left incomplete at the time of Melzi’s forty years later, with only a small amount of the material on anatomy included in Leonardo’s Treatise on painting, published in France in 1632. During the time that Melzi was ordering the material into chapters for publication, they were examined by a number of anatomists and artists, including Vasari, Cellini and Albrecht Durer who made a number of drawings from them. Leonardo drew many studies of the human skeleton and its parts, as well as muscles and sinews. He studied the mechanical functions of the skeleton and the muscular forces that are applied to it in a manner that prefigured the modern science of biomechanics.

He drew the heart and vascular system, the sex organs and other internal organs, making one of the first scientific drawings of a fetus in utero (see above). As an artist, Leonardo closely observed and recorded the effects of age and of human emotion on the physiology, studying in particular the effects of rage. He also drew many figures who had significant facial deformities or signs of illness. Leonardo also studied and drew the anatomy of many other animals as well, dissecting cows, birds, monkeys, bears, and frogs, and comparing in his drawings their anatomical structure with that of humans. He also made a number of studies of horses.
Posted by Intelliblog at 10:59