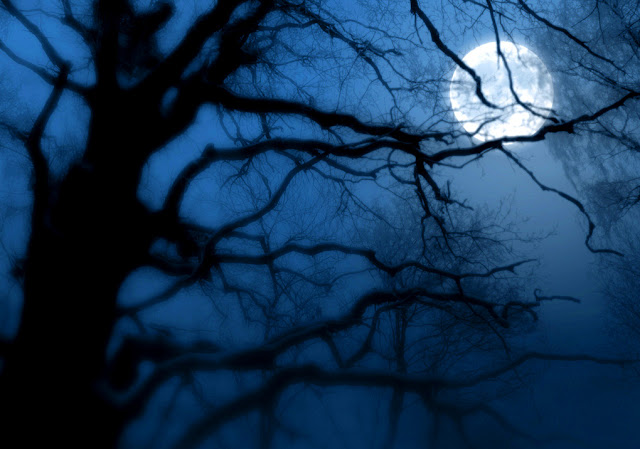 “The moon is a friend for the lonesome to talk to.” - Carl Sandburg

Full moons were very significant in the past when lunar calendars were widespread. Each full moon of the year had its special name, according to what it signified. In medieval times the full moons were named thus:

I was in the garden in the coldness of evening on Monday, and caught the moon as it was rising. Bats were flying around the treetops and the full moon, bright and silvery peeked through the clouds. It was a magnificent sight and I could understand how it has inspired poets, delighted lovers, kept insomniacs awake and maddened lunatics through the ages. As the nearest heavenly body to earth, the moon exerts an all-powerful influence and is an endless source of inspiration, mythology and folklore to cultures all around the world.

Here is my full moon poem for Poetry Wednesday:

The full moon bites tonight
With red fangs and ice-cold breath
That freezes to the marrow.
Which death would you prefer:
Exsanguination or a gelid sleep
That merges with death slowly?

The full moon mocks me tonight
Through shuttered windows
Sending thin, silver pins of light.
Moonlight still pierces the heart,
Even if shades are drawn;
And death lies still, waiting in the dark.

The full moon cackles tonight
Like an old crone, a witch,
Who weaves evil spells with moonbeams.
The ancient magic catches hearts
With a silvery net, this April night
As Egg Moon waxes full.

The full moon weeps tonight
As it reflects my face gazing at it,
Finally mirroring my heart of hearts.
An old story, a lost love, sadness –
All washed with moonshine tears
And are cleansed, at last redeemed.
Posted by Intelliblog at 22:12