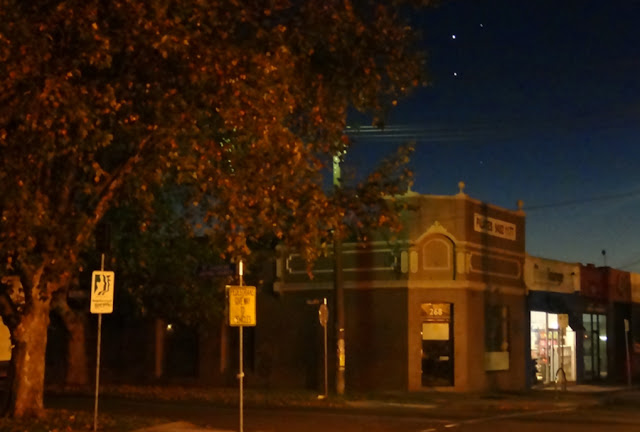 “The best way to appreciate your job is to imagine yourself without one.” - Oscar Wilde

I got up frightfully early today, not because of any special reason, but simply because I had had enough sleep. When I was a young lad, I was a sleepyhead. After puberty I started to sleep less and in my late twenties I needed only about six hours sleep a night. Nowadays I seem to only need about four or five. It is a good deep sleep that seems to refresh and relax me sufficiently. This regime also allows me to get a lot more done, in terms of both work and leisure. When I shall die I shall sleep for a long time indeed, so I am grateful that most of my living time is awake time!

The temperature at the station (where I caught the earlier train) was 3˚C and frost made the stairs of the overpass treacherous. Casting my eyes heavenwards I was rewarded with a view of three bright planets above the eastern horizon. Mercury (how rare to see this one so clearly!), Venus and Jupiter all resplendent, with Mars lagging behind them a little, closer to the horizon. Low in the sky of the east, dawn was breaking with the firmament turning a paler dark blue where it touched the earth. The bright yellow streetlights gave the landscape a surrealistic feel and the deserted streets littered with autumn leaves contributed to this.

When I got to work, our maintenance man told me that the heating system was not working and that we would have to endure the cold not only today, but until it was fixed sometime later this week. Just as well I had a small heater in my room that warmed it slightly! It meant that my ears could defrost. Tomorrow morning I shall wear my woollen beanie – surely a sign of getting old! Whenever I felt particularly cold today, at my desk, in the conference room, outside, I turned my thoughts to the couple of homeless people I saw huddled outside the station, wrapped in dirty blankets and obviously feeling much colder during the night than I had ever felt. Everything is relative, with discomfort and hardship being an apt example here.

Nevertheless, the day was a busy one, with lots achieved, despite the two meetings that I had to attend. Maybe the coldness of the building contributed to mental acuity! Punish the flesh and exercise the mind… My immediate boss, who also to happens to be the CEO was visiting the campus today and we had a long chat about all sorts of things. I get on well with her and as well as working well together we often have a laugh or two. She is a seasoned businesswoman and her experience has stood her in good stead when dealing with some urgent issues that she inherited from her predecessor.

We have the graduation ceremony coming up here in Melbourne on Friday and then I’m off to the graduation ceremony in Adelaide on Sunday. Then first thing on Monday morning, off to Brisbane for a meeting at the Department of Education. Later on this month, to Brisbane and Perth again. Travelling for work does get tiring very quickly and day trips over such long distances can be exhausting, but I’d rather sleep in my own bed than in a hotel room.
Posted by Intelliblog at 01:45