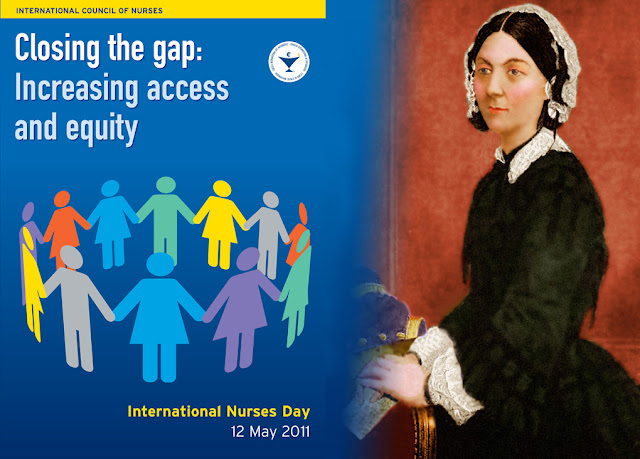 “The trained nurse has become one of the great blessings of humanity, taking a place beside the physician and the priest.” - William Osler

It is International Nurses’ Day today celebrated around the world every May 12, the anniversary of Florence Nightingale’s birth. Florence Nightingale is famous for her nursing work during the Crimean War (1854-1856). She changed the face of nursing from a mostly untrained job to a highly skilled and well-respected medical profession with very important responsibilities. Florence Nightingale was born in Florence, Italy on 12 May 1820 and the city she was born in provided her family with inspiration for her first name.

Her father, William Nightingale, was a wealthy landowner. Florence was brought up in Derbyshire (where she spent her summers) and Hampshire (where she spent her winters). At the time when Florence was born, many girls did not receive any type of education except how to run a household and how to be good hostess. Florence was very lucky because her father believed that all women should receive an education. He taught Florence and her sister a variety of subjects ranging from science and mathematics to history and philosophy.

As Florence grew up she developed an interest in helping others. She cared for sick pets and servants whenever she had the chance.  At seventeen years of age, she believed her calling in life was “to do something toward lifting the load of suffering from the helpless and miserable.” At first her parents refused to allow her to become a nurse because, at that time, it was not thought to be a suitable profession for a well-educated woman of her social class. But Florence persisted and eventually her father gave his permission and Florence went to Europe in 1849 to study the European hospital system. In 1850, she travelled to Alexandria, Egypt and began studying nursing at the Institute of Saint Vincent de Paul. In 1851, aged thirty-one, Florence went to Germany to train to become a nurse. In 1853 she came back to England and sufficiently trained she was running the Hospital for Gentlewomen in London as a superintendent.

In 1854 Florence Nightingale was asked to go to Turkey to manage the nursing of British soldiers wounded in the Crimean War (1854-1856). She travelled to Scutari (the location where the wounded and ill soldiers of the Crimean War were taken) to help the wounded soldiers. In Scutari, she found the hospital conditions to be appalling. Many of the wounded were unwashed and were sleeping in overcrowded, dirty rooms without blankets or decent food. In these conditions diseases such as typhus, cholera and dysentery spread quickly. As a result, the death rate amongst wounded soldiers was very high. Most soldiers died from infections and disease (only one in six died from their war wounds; the other five in six died from infections and disease).

Florence and her nurses changed these conditions. They set up a kitchen, fed the wounded from their own supplies, dug latrines for sanitation, and asked for help from the wives of the wounded. They were then able to properly care for the ill and wounded and the death rate among the soldiers dropped.  Florence was very dedicated to her job. She would often visit the soldiers at night when every one was asleep just to make sure they were at ease. She was then referred to as “The Lady of the Lamp” because she hardly took time off to sleep. Florence became a true hero to the soldiers and everyone back home in England.

While at Scutari, Nightingale collected data and systematised record-keeping. She was able to use the data effectively as a tool for improving city and military hospitals. Nightingale’s calculations of the mortality rate showed that with an improvement of sanitary methods, deaths would decrease. Nightingale took her statistical data and represented them graphically. She invented polar-area charts, where the statistic being represented is proportional to the area of a wedge in a circular diagram.

Nightingale’s personality is well documented. She rebelled against the idle, sheltered existence of her family her entire life. She achieved a leading position in a world dominated by men, driving and directing her male coworkers as hard as she did herself. She often complained that women were selfish, and she had no time for the growing women’s rights movement. But she also developed an idea of spiritual (relating to or affecting the spirit) motherhood and saw herself as the mother of the men of the British army (“my children” as she called them) whom she had saved. Florence Nightingale never really recovered from the physical strain of the Crimean War. After 1861 she rarely left her home and was confined to her bed much of the time. She died on August 13, 1910, in London, England.