MAY DAY AND OPHELIA 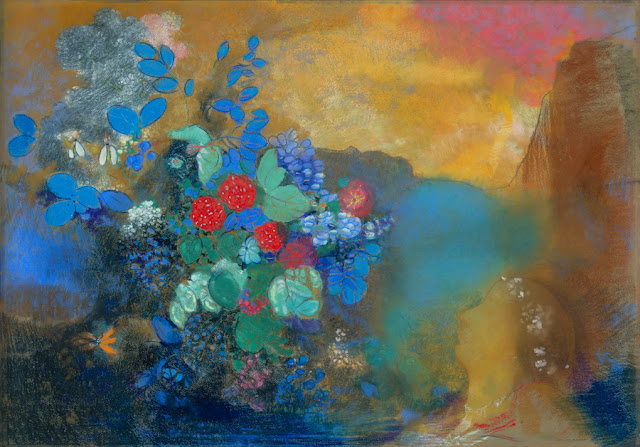 “He that is in a town in May loseth his spring.” - George Herbert

Happy May Day! I hope that Spring has truly sprung in the Northern Hemisphere, and that you took the opportunity to go gambolling in the fields, a-Maying! I know in many European countries, May Day is an opportunity for going out into the countryside and collecting wildflowers. It is a time of singing, dancing and celebration. Winter has well and truly gone and Spring is in its full glory. A May wreath is made and hung up on the entrance door once everyone returns t the house. This may well be another tradition that is lost to city dwellers just as the countryside gets progressively further and further away from them as the city sprawls ever outward.

We drove out into the countryside, but it was well and truly Autumn (see my Photoblog)! The skies gray, the occasional shower fell but nevertheless, we went a-Maying! We still have a wonderful showing of blooms in our gardens, with the glory of the chrysanthemums in preparation for Mother’s Day next Sunday.

In tribute of the day, a flower painting by Odilon Redon, who painted many flower pictures replete with striking colour and brilliant pure pastel hues, pastel on paper being one of his favourite mediums.

Bertrand-Jean Redon better known as Odilon Redon (April 20, 1840 - July 6, 1916) was a Symbolist painter and printmaker. He was born in Bordeaux, Aquitaine, France. Odilon was a nickname derived from his mother, Odile. Redon started drawing as a young child, and at the age of 10 he was awarded a drawing prize at school. At age 15, he began formal study in drawing but on the insistence of his father he switched to architecture. His failure to pass the entrance exams at Paris’ Ecole des Beaux-Arts ended any plans for a career as an architect, although he would later study there under Jean-Léon Gérôme.

“Peyrelebade”, his father’s estate in the Médoc became a basic source of inspiration for all his art, providing him with both subjects from nature and a stimulus for his fantasies, and Redon returned there constantly until its enforced sale in 1897. He received his education in Bordeaux from 1851, rapidly showing talent in many art forms: He studied drawing with Stanislas Gorin (≈1824-1874) from 1855 and he also became an accomplished violinist. He developed a keen interest in contemporary literature, partly through the influence of Armand Clavaud, a botanist and thinker who became his friend and intellectual mentor.

He learned lithography under Henri Fantin-Latour and he came to be associated with the Symbolist painters. His oils and pastels, chiefly still lifes with flowers, won him admiration as a colourist from Henri Matisse and other painters. His prints (nearly 200 in all), which explore fantastic, often macabre themes, foreshadowed Surrealism and Dada.

This is his Ophélie dans les fleurs (Ophelia among the Flowers) circa 1905-8, a pastel on paper work (640 x 910 mm). Redon fills this painting with rich, bright colour, highlighting the flowers. Ophelia is in shadowy profile with a relatively sepulchral yellow ochre. The colouration suits the theme of the death of Ophelia from Shakespeare’s “Hamlet”. The lovesick Ophelia, driven to madness by Hamlet’s cruel rejection of her, drowns while picking flowers. The sky is a rich yellow pink, signifying perhaps sunset and death, while the blue water that drags Ophelia down is a rich ultramarine.

In his journal for 1903 he wrote of his empathy for natural elements in his work: “I love nature in all her forms ... the humble flower, tree, ground and rocks, up to the majestic peaks of mountains ... I also shiver deeply at the mystery of solitude.”
Posted by Intelliblog at 02:20