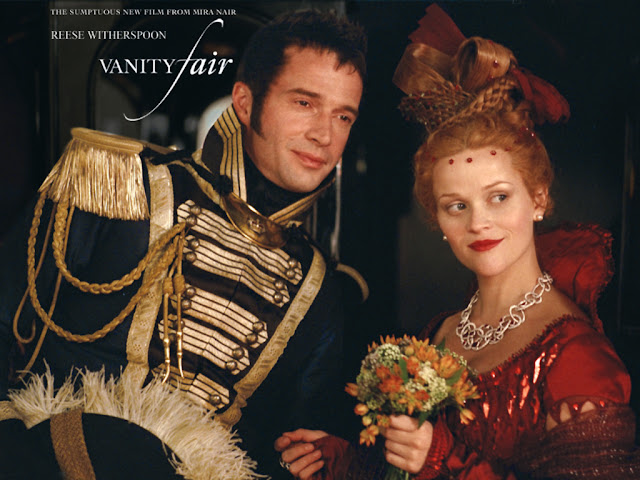 Society bristles with enigmas which look hard to solve. It is a perfect maze of intrigue.” - Honoré De Balzac

At the weekend we watched Mira Nair’s 2004 film, “Vanity Fair” starring Reese Witherspoon, James Purefoy, Romola Garai, Bob Hoskins, Jonathan Rhys Meyers, Gabriel Byrne and Tony Maudsley. The film is from the classic novel of the same name by William Makepeace Thackeray (1811-1863), the famous English 19th century novelist. “Vanity Fair” is Thackeray’s satirical masterpiece of contemporary English society and manners. In it he creates the unforgettable portrait of the roguish upstart Becky Sharp, who although is quite amoral, one cannot but defer to in terms of her being a survivor by virtue of her wits. Another famous novel of his transferred to a now classic film is “Barry Lyndon” directed by Stanley Kubrick in 1975.

The director Mira Nair one may remember from her 2001 film “Monsoon Wedding”, which was quite popular and very enjoyable. She also has other films to her credit, including the wonderful “The Namesake” of 2006, and the confronting debut film “Salaam Bombay!” of 1988. She is an accomplished Film Director/Writer/Producer who was born in India in 1957 and educated at Delhi University and then at Harvard. She began her film career as an actor and then turned to directing and writing. Her films if not about India and Indians are often full of references to her homeland, evident even in “Vanity Fair”.

Nair’s “Vanity Fair” is very English and very 19th century, however, India was very English at that time as well. Thackeray was actually born in Calcutta to parents associated with the British East India Company. When his father died, young William was sent back to England at the tender age of 5 years to be confined in a boarding school. His childhood memories of India surface in his books, “Vanity Fair” not being an exception. The novel “Vanity Fair”, first appeared in serialised instalments beginning in January 1847. Even before Vanity Fair completed its serial run, Thackeray had become a celebrity, sought after by the very lords and ladies he satirized, who hailed him as the equal of Charles Dickens.

The plot concerns itself with the life and times of Becky Sharp, the poor daughter of a French “opera singer” and a starving English artist. Her mother’s abandonment and her father’s death leave the young girl at the mercy of the principal of a home for orphaned girls. She manages to work her way into a governess’s position in the home of a shabby aristocrat. As new opportunities arise, she hastily abandons her post to become the companion to a wealthy relative, Miss Crawley. Much to Miss Crawley’s displeasure, Becky wastes no time to climb the social ladder by secretly marrying Miss Crawley’s nephew. He is sent off to war and on his return, their marriage is rocky due to his gambling debts, her living beyond their means, and her never-ending quest to raise their status. When Becky meets a nobleman who collects her late father’s paintings, she uses his money and his influence to continue her rise in the social hierarchy, causing more stress in her marriage.

Thackeray’s novel is a panoramic cavalcade rich in detail, full of remarkable characters and many plot twists and turns, as well as numerous sub-plots. Nair has tried to cover the expansive novel, but by necessity must distil the essence and leaves the characters somewhat undeveloped. Becky is portrayed by Nair rather sympathetically as a victim of the social system who by her razor-sharp wit and keen mind is merely taking advantage of opportunities that present themselves to her while allowing circumstances and events to benefit her grand plans. This contradicts with Thackeray’s Becky, who is less likeable: She is a vicious, manipulative and cunning woman, who turns events into anything that will benefit her rise up the social ladder. Nair has changed the essential features of the character and has robbed the plot of its cutting satire.

The film more than makes up for this in the richness of its visual splendour, authentic period detail. Declan Quinn’s beautiful cinematography is a feast for the eyes and the Indian touches are quite sumptuous (although Becky’s Indian dance is a bit questionable). There is quite good acting (even with Witherspoon doing an English accent, which fails every now and then, but we forgive her that!). Bob Hoskins has such a whole lot of fun in his role as the scungy nobleman, as does Eileen Atkins as Miss Crawley. James Purefoy and Jonathan Rhys Meyers as the male leads do a good enough job and Romola Garai as the gentle Amelia is contrast enough to Becky.

The film is not a true distillation of Thackeray’s novel. Its spirit and biting satire have been lost, Becky Sharp has become laundered into a victim of circumstance rather than the heartless and calculating vixen Thackeray describes her as. For someone who has not read the novel, Nair’s film would be quite satisfying and enjoyable, perhaps. However, if you have read Thackeray’s “Vanity Fair” this film disappoints.

There have been numerous other translations of this novel to the screen, notable being Rouben Mamoulian’s 1935
“Becky Sharp”, which also has the distinction of being the first, full-length Technicolour film with Miriam Hopkins in the title role. One of the better adaptations is the BBC mini-series from 1987, which at eight hours can afford to be more faithful to the original.

Nair’s “Vanity Fair” is worth seeing, but do judge it on its own merits and divorce yourself from Thackeray’s novel. It is a modernisation, an adaptation, a derivative artwork. Just as we admire both the original “Mona Lisa” and Marcel’s Duchamp’s irreverent L.H.O.O.Q. so we should enjoy reading both the novel and Nair’s interpretation of it. Let’s just call Nair’s “Vanity Fair” by the name: “Becky Sharp with a Moustache”…
Posted by Intelliblog at 02:41