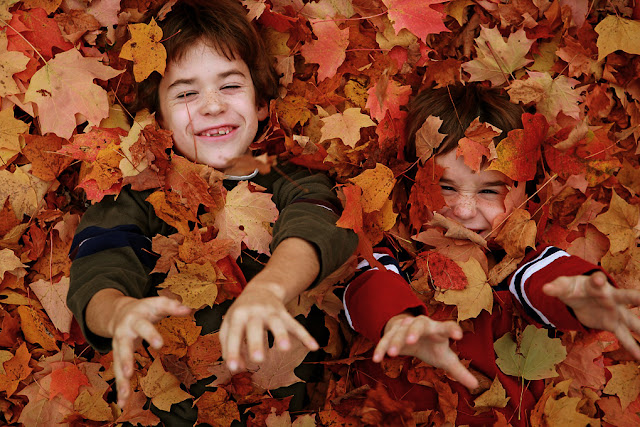 “Sweet childish days, that were as long  as twenty days are now…” - William Wordsworth

I was out driving this afternoon whilst going out to meet up with friends and I passed by a park in Carlton. It was a cool but fine afternoon and many people were about. I stopped at a red traffic light and my eye caught and father and his two young children. They must have been three or four years old and they were having such fun. They were playing in a big pile of fallen autumn leaves. Jumping into the midst of the heap, tossing up the dry leaves, rolling around them while squealing with delight. Their father was laughing while watching them, and I too stared from across the road, smiling and partaking vicariously of their carefree and joyous pleasure.

How short our childhood is, in retrospect! While we are young time flows so slowly, and our perception of time is dilated by our limited experience of it. Just as is perception of distance, which seems to be judged by our smaller stature. “Are we there yet?” – that ever-familiar cry seems to exemplify the enormity of both time and space as experienced by the child. Yet, while looking a the scene in the park this afternoon, I thought ruefully how now, in my middle age, time seems to rush by (nearly half the year is over – where did it go?). Cars, trains, planes, our busy lives have made space smaller, and all too quickly “we are there”.

When was the last time I experienced the pure unadulterated pleasure those children playing in the fallen leaves this afternoon were enjoying? Surely decades ago, when I was a child myself. The magic kingdom of childhood, a happy place, a carefree place, a place where we enjoy life the best, or so it should be. For some children things are not as rosy as this…

Today is the United Nations’ International Day of Innocent Children Victims of Aggression, which is observed every year. The purpose of this day is to acknowledge the pain suffered by children throughout the world who are the victims of physical, mental and emotional abuse. This day affirms the UN’s commitment to protect the rights of children. The day originated when UN workers raised the alarm as they were appalled by the great number of innocent Palestinian and Lebanese children victims of war. On August 10th, 1983, the United Nations General Assembly decided to commemorate June 4th of each year as the International Day of Innocent Children Victims of Aggression.

While considerable progress has been achieved in the past few years in obtaining a framework of international norms and commitments that protect the rights and wellbeing of children, the general situation for children remains grave and unacceptable.

It is only appropriate that tonight’s music for Song Saturday is devoted to children and what better than Robert Schumann’s “Kinderszenen” (Scenes From Childhood - 1838) played by Vladimir Horowitz. This is a 1962 studio recording from New York City.