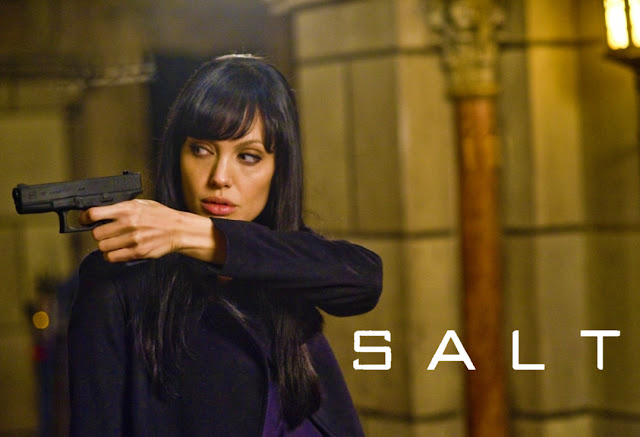 “For me, the filmmaking has to be about the dramaturgy.” - Neil Jordan

Yesterday we enjoyed our Sunday very much as it was a beautiful day, fine and sunny, spring-like in its freshness and gentle warmth. We got lots done in the garden, went to the market and in the afternoon walked to the Parklands where it was a pleasure to see the wattles in bloom, enjoy the flowering plum-trees, the masses of violets and the blossoming natives. We got home three hours later, not having realised how quickly time passed. At home we washed up and then went out to an early dinner at our local pub. Then, back at home, we watched a movie on DVD. Unfortunately, this put a dampener on the day as it was quite a dud!

The movie was Phillip Noyce’s 2010 potboiler “Salt”, starring Angelina Jolie. There was such brouhaha when the movie first came out that we ignored it quite completely (as it turns out, wisely). However, once again we succumbed to the specials bin at our DVD store and decided to see what all the fuss was about. The plot was standard spy thriller guff and the scriptwriter followed just about every convention in order to make an “exciting” movie. Typical dick-flick with Angelina pouting away in order to drive home this point.

In short, the story revolves around Evelyn Salt who is a successful CIA agent respected by all, especially her boss, Ted Winter. She is married to a German arachnologist, the two being much in love. One day a Russian spy comes into the cover offices of the CIA and says he is a defector. He asks for Evelyn Salt and tells all that the President of Russia will be assassinated during his forthcoming visit to New York City to attend the funeral of the recently deceased USA Vice President. He further reveals that the name of the assassin is Evelyn Salt. Salt tries to contact her husband, but as she cannot do so, decides to go on the run and doesn’t stay to defend herself against the accusations. Her boss does not accept that she is a mole or a double agent, however, her subsequent actions shake his faith in her innocence. What follows is a conventional spy movie with lots of violence, attempts at twists and turns in the plot and some spectacular special effects.

Unfortunately, the movie is illogical, much too stereotypical and completely unbelievable. Jolie in the title role is fine enough, but somehow she does not convince the viewer. Admittedly she has a tough job making her character believable as it is too much of a cardboard cutout. There is scene after scene of action and murder, violence and car chases, thrills and spills. I kept thinking that the film was like a computer game. The plots and twists were annoying and unsatisfying and one could easily get lost in what we were meant to believe in terms of whose side Salt was on. Being neither Russian nor American we could almost not care, as neither side appeared to be worth belonging to…

Even the ending of the film was unsatisfying as it was too much of a set-up for a sequel. The whole thing was too formulaic and predictable, but at the same time annoying as it tried to pretend to be something else. Nothing worse than a potboiler trying to convince you it’s high art. We could see after watching the movie why it was so controversial. Those who watched it purely for its thrills and spills, the mindless violence and the stereotypical “us and them” cold war primary school mentality plot would enjoy it. The rest of us who want some depth, some motivation, some characterisation, some clever plot development, think this is a terrible film. Watch at your own risk.
Posted by Intelliblog at 01:38